Tooth and claws have nothing on love

When most hunters speak of “Dangerous Game”, they are referring to hunting predators such as bears and lions and large antelope with angry dispositions like “Black Death”: the cape buffalo of many African hunting tales.

As dangerous as these hunts may be, when you interfere with the breeding process of an animal that has a very small window each year in which to mate, you may find that even the most docile creatures morph into raging beasts set on your destruction. Moose are one such creature.

For 11 months of the year these docile swamp donkeys lazily hang out, with food as their number one priority. Following their stomachs, they’ll travel from ridges to swamps to shorelines looking to build up their fat stores in order to endure the long winters their habitat generally throws at them.

But when the sun’s angle dips to the point of triggering some ancient, physiological change in their body chemistry — look out! Their bodies start producing hormones to prepare them for the rut and the right to breed to spread their genes.

This change creates excellent opportunities for hunters. We set up our hunting season to take advantage of the peak of the rut, but be warned, these gentle giants turn into obstinate beasts if things don’t go their way at this time of the year. What follows is a tale of discovering just how ornery these northern monarchs can be.

I was guiding a bowhunter in the remote Canadian north several autumns ago. We would travel along the river to moosey spots and call. I was cow calling, trying to lure in one of the lovesick bulls we knew were in the area.

As we travelled from one calling location to the other, we spotted a sickly looking bull standing at the water’s edge. He wasn’t the size of bull we were looking for, but we watched him for a short while, wondering if a wolf attack had left him lame. He slowly moved off and we continued along. 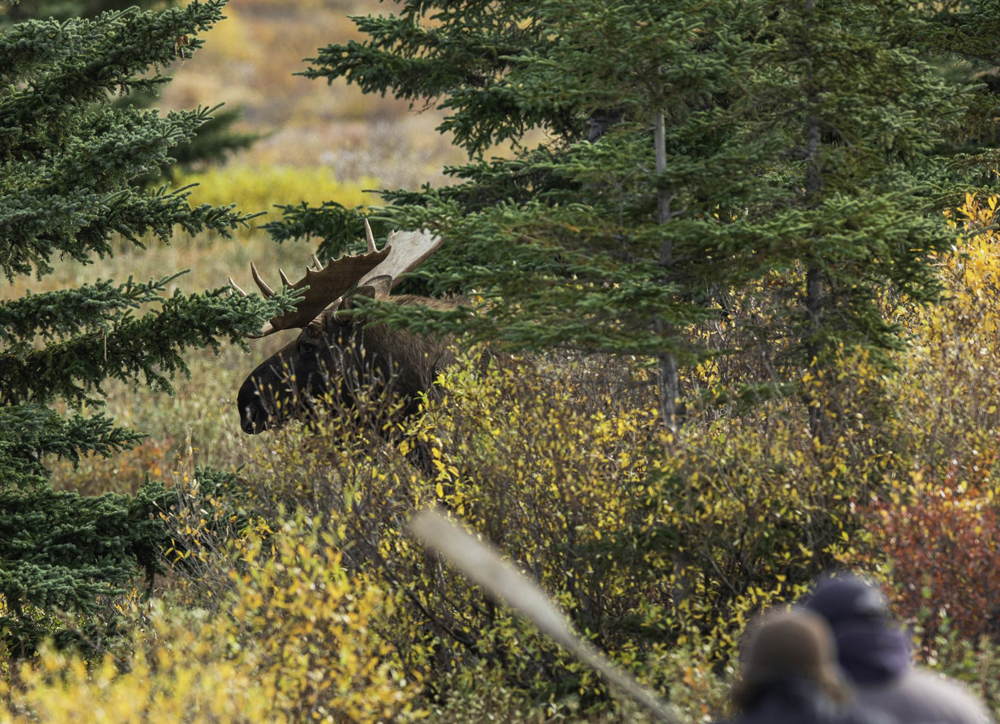 We had hardly moved when suddenly the smell of rutting moose hit us square in the face. For those of you who’ve never encountered the scent of a rutting bull moose, it is a strong, barnyard-type odour produced when a bull makes rutting pits (depressions in the ground he urinates in) he can roll around in to get all “perfumey” for the ladies!  Checking the wind, we knew the smell was not from the lame bull we had just seen. It was coming from the shoreline to our left. 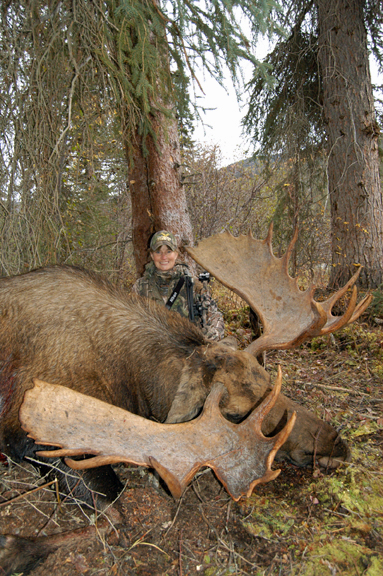 We beached the boat and started working into the wind, following our noses. By this time I had pieced the puzzle together. The bull we had seen in the water was the loser of a battle for supremacy with the stinky bull we were now working in on. Nothing beats the thrill of walking in the woods trying to locate a bull still worked up from his latest battle!

Within minutes, I saw a piece of antler move and upon closer inspection we knew we had found the bull. He was bedded down in the dark timber, resting from his most recent triumph.  I decided to approach him as another bull looking for a fight, hoping he was still in a feisty mood.
We walked toward him, my hunter immediately behind me. I grunted softly as I walked and raked the odd tree as we closed the distance. Almost immediately the bull stood and turned to face us. It was then that I noticed the cow moose bedded down a few yards away from him. He started coming in hot, prepared to defend his lady and his territory.

He was displaying as we walked towards each other — tipping his head slowly from side to side — and I was mimicking him as best I could, holding a paddle from the boat over my head. As we neared bow range I started moving to my left, telling my hunter the bull would do the same, offering a broadside shot at close distance. The bull read the script and began turning.

As soon as the bull was in a good position, my hunter shot. This should have been the point in the story where the bull goes crashing into the bush and we pick up the trail to recover our trophy, but he wasn’t ready to give up the fight. Instead of running off, he re-positioned himself for a head-on advance. My hunter asked if she should try and get off another shot. I told her, “If you can make another good shot, take it as soon as you can!”

The bull angled slightly right, and a second arrow was on its way.  Upon impact however, the bull became impatient with this game and decided on a full-on advance. With only yards to cover we needed a plan, fast.

Realizing I couldn’t take a thousand pounds of angry ungulate, I grabbed the hunter and jumped behind the nearest tree for cover. The bull caught our movement and tried to cut us off on the other side of the tree.

Something must have convinced him to continue running rather than chase us around the tree, because he continued in a straight line, leaving us unscathed and cowering behind our safety tree. He actually did us a favour by running towards the shore.

A few seconds later we heard a crash and we knew it was over, but we still took a little extra time to make sure before taking up the trail. At the end of the trail was a great bull that left us with incredible moose hunting memories…

of our Dangerous Game.