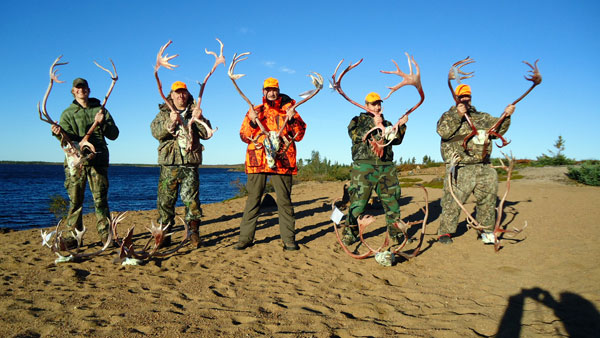 The beginning of the 2011 caribou hunting season found two father and son pairs at Schmok Lake Lodge – Ross and Jason Roy and Gerald and Jeremie Kuhl.

Ross and Jason booked their hunt with Webber’s Lodges after Jason spoke with me several times at the Hunt Fest Show in Winnipeg. I could instantly see that Jason was very excited about the prospect of shooting two bulls on the trip and the fact that he could hunt for these majestic tundra monarchs with his father.

Gerald and Jeremie Kuhl were the lucky recipients of a caribou hunt that was donated by Webber’s Lodges to the Steinbach Fish and Game Club as a raffle prize. After a few e-mails and phone calls, both were keen to venture north and hunt the big herds of Manitoba caribou.

It was warm and sunny with a hint of wind from the west when the float plane landed at Schmok Lake to kick off the 2011 caribou season. The father-son pairs tossed their gear into their rooms, enjoyed a short orientation and struck off across the tundra.

With countless small herds of caribou milling around Schmok Lake, caribou wandering through the camp and one large group of bulls bedded down on a nearby ridge, the hunting was exceptional. It wasn’t long before the meat racks were full!

The tags were filled in about three days and the guys had time to do some fishing for lake trout and the always tasty northern pike. Jason and Ross shared their favourite fish batter recipe with me and it was delicious! A must-add to our shore lunch menu at North Knife Lake Lodge!

Gerald and Jeremie also enjoyed some great fishing at Schmok Lake after tagging out early in the week. Jeremie was a highly motivated young man who was not afraid to assist with some of the camp chores and maintenance. With his hard working attitude and great personality I might have to hire him to work for us in the future. His help was greatly appreciated!

All four hunters harvested two caribou each and said they had a fabulous time with us. But don’t take my word for it… just read the quotes below, that they left in our guest book.

This was our first time on a caribou hunting trip. We first met Kent at the Hunt Fest Show in Winnipeg in 2010. Jason, my son, was so pumped that we decided to take the trip of a lifetime. We tagged our trip “The Caribou Craze” and it lived up to everything promised. Thank you very much to Kevin for the superb meals and to Kent for the fantastic hospitality, the entire crew at Webber’s Lodges did a bang up job. Thanks again from Jason and me.
– Ross Roy, Sept. 2011

Truly one of the most memorable times of my life, from the start of the journey to the end it was an awesome trip. I have to personally thank Kent for making one of my dreams a reality. Thank you very much to Kevin for the company and awesome meals, and to the whole crew and guides at Webber’s Lodges. This place is a hidden gem and it makes me proud to live in the beautiful province of Manitoba. Thanks again Webbers.
– Jason Roy, Sept. 2011

This was an awesome hunt!! From the phone messages to the follow up conversations with Kent I really got pumped. Thanks Kent for sharing your knowledge and teaching us about skinning caribou and filleting fish. Thanks Kevin for a bang up job on the grub, conversation and humour.
– Gerald Kuhl, Sept. 2011

Never did I think I would see so many caribou in one place. Best week of my life and most enjoyable time ever. I will return again. It was way more than expected. The people were great and the relationships we built made it so much better. Thanks to Webber’s Lodges for everything.
–  Jeremie Kuhl, Sept. 2011

We have a strong feeling that Ross, Jason, Gerald and Jeremie will be back again for another great Canadian caribou hunting adventure with Webber’s Lodges.

We’re already looking forward to it!