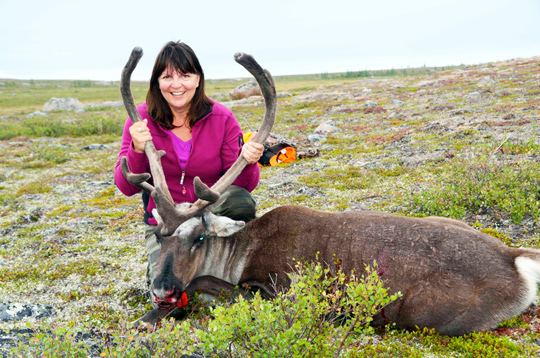 My first caribou. Thanks Webber’s Lodges! 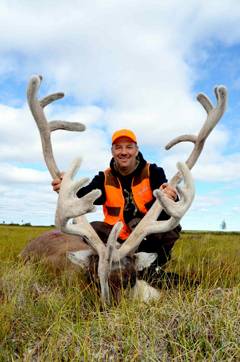 We spotted him from the boat; a hefty bull with a set of frosty white antlers clad in velvet perched on his head. My brother-in-law Kevin and I — over the drone of the outboard — had the following conversation.

There were only seconds to make this decision, so I got a little firm.

The motor went dead. The Alumarine rumbled up the rocky beach. Kevin was out of the boat, running alongside, then scrambling up the beach. He had made his decision.

I heard the shot but didn’t see it. By the time I tied down the boat, Kevin was making a slow walk across the tundra to his very first caribou, taken in the morning of opening day 2012. I wouldn’t have to wait long for my chance.

Our mid-afternoon hike took us up to the Inukshuk, less than a mile north of the Schmok Lake cabin. From the rise I spotted movement to the west; a lone bull drifting among the few low spruces on the tundra. “Caribou,” I whispered to Kevin.

We decided to move in for a closer look. At about 300 yards, I decided this one was mine. His antlers weren’t trophies, but his body was big and I felt the need to fill my first ever caribou tag. At the same moment, he bolted. We chased. 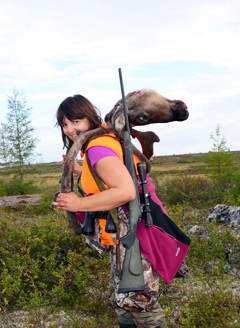 This smile was easy!

Kevin was on the lead and easily bounced over a 10-foot bog. I stepped one, two and three, then promptly sank to mid-thigh. “Kevin!” It was a half whisper, half yell. He looked back at me, then again to the caribou. I knew what he was thinking. Lucky for me, he chose to yank me out of the muck. We picked up the chase.

The caribou abruptly stopped. We dropped to our bellies. He was 150 yards away. I rested my rifle on my pack, desperate to catch my breath. One exhale. I squeezed the trigger.

The caribou took a few steps to the west; out of sight. Before doubt could creep into my mind, he appeared again. With my second shot, there was no doubt.