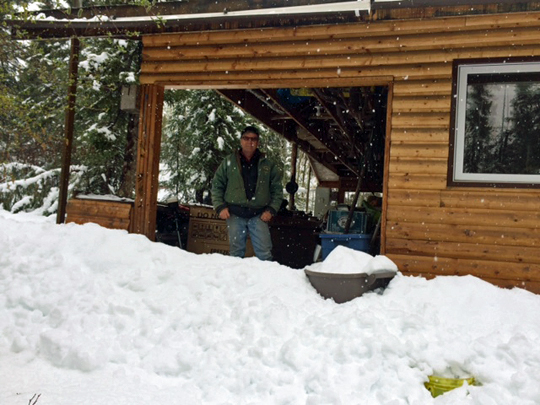 June 4 started with a feeling of excitement. I was getting ready to fly to Thompson to pick up Danny, the man who was going to install the final pieces of equipment that would give us a major infusion of power into our existing solar power system at North Knife Lake Lodge.

The newly designed ultra-efficient 3,500 Watt wind generator is in its final stages of installation. The associated cabinetry and controllers are state of the art and in some cases, clearly innovative. The specially designed blades are environmentally friendly, as they are low rpm and have the exceptional capacity of negative bird strikes. During the three year trial run of the wind generator, not one bird was struck.

As I prepped the airplane for the flight, the matriarch of the resident wolf family poked her head out of the bush across the runway to see what I was up to. As I warmed up the engine, she scooted across the runway about 100 meters away, obviously intent on a mission that likely had something to do with food.

It was a clear beautiful day and the flight to Thompson was uneventful, so I was able to enjoy the gorgeous panorama of another Northern Manitoba spring as it unfolded around me. While waiting for Danny’s plane, I had time to run a few errands, pick up parts, groceries and fuel for the trip back. Danny arrived and we climbed aboard for the flight back to North Knife Lake.

As we came in for landing I noticed the momma wolf standing by the runway watching our progress. Despite the presence of a strong cross wind, I managed to pull off an acceptable landing and we coasted to a stop at the “terminal building” where the road leads to the Lodge just a quarter mile away. The wolf continued to watch us, and as long as we ignored her, she was content with our presence. Any attempt to approach her would see her melting into the forest.

A quick supper after Danny was settled in brought about the usual end-of-day tiredness. We checked the equipment we brought and crawled off to bed.

The expected cruddy weather arrived in the middle of the night. Flying back to Thompson for the additional bodies we required for tower erection was out of the question. There was a lot to do, with the mounting of the equipment and the hooking up the control charger. As the weather deteriorated over the next three days we got the Internet sorted out and set up for monitoring the equipment from the Lodge. From the office we could now see what was happening in the Battery Room, where all the solar and wind charging takes place. 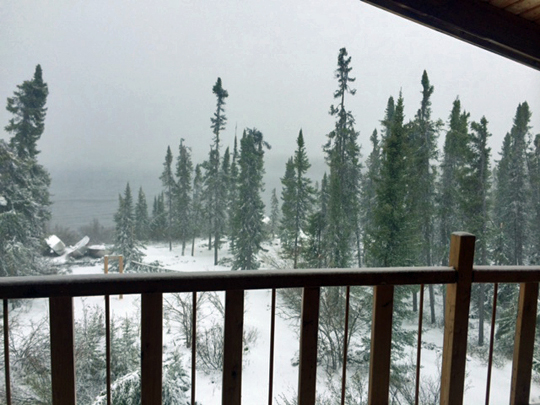 During the storm, the wolf continued making her rounds near the Lodge. There were new tracks morning and evening through steadily increasing snow cover. We expected to see the pups make their first foray out into the world shortly after the storm had run its course and the snow had melted back into the ground.

New birds continued to show up on a daily basis. The loons, mergansers, mallards, pintails, Canada geese and bald eagles are all prepping their nests and getting ready to lay eggs. We also saw Pine and Evening grosbeaks, two or three species of warblers, Bank and Tree swallows, nighthawks, redpolls, robins, various gulls and peregrine falcons.

Some of the birds are residents and others are just passing through. Pine martins, mink and foxes are evident in the sand and occasional sightings confirm their presence. Beavers at the creek and south river are sending numerous bark-stripped branches downstream, indicating healthy numbers.

The continuing storm compromised the completion of the windmill project, as high winds were detrimental to the raising of the tower. As with many projects in the seasonal lodge business, a few weeks or months delay may be the outcome, but all will get done.

Danny’s unique skills in the alternate energy arena are necessary to make final adjustments once the windmill is producing power. As his departure day drew near and the storm continued, with eight inches of snow already on the ground, resignation of the inevitable began to take hold.

In time however, all this will be in the past and our carbon footprint at North Knife Lake Lodge will continue to shrink as we bring the wind generator on line. Stay tuned for the conclusion of Project Wind Power at some time in the near future!

June 7, 2014 Update: We put the blades on the windmill yesterday and with it resting on the barrel it was producing a couple of amps of power, which is going right into the batteries!