Rest and recreation leads to big tuna in Panama

Home/Fishing/Rest and recreation leads to big tuna in Panama 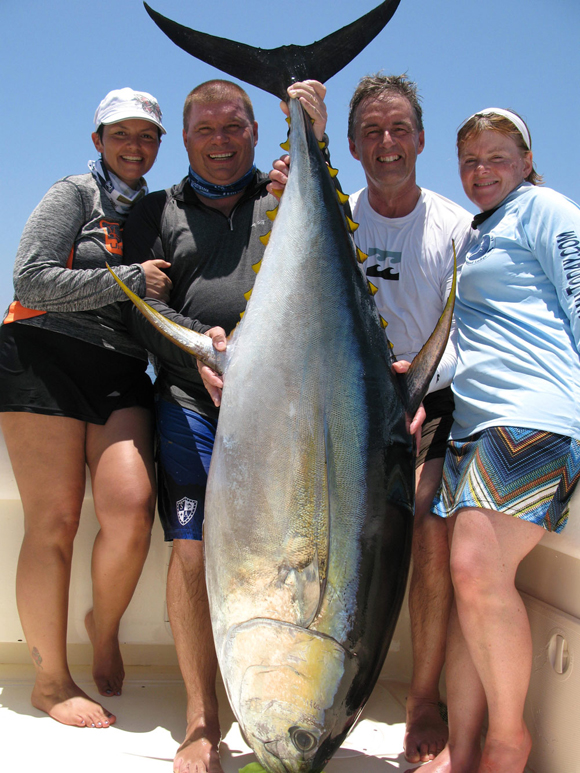 With our own fishing season fast approaching at North Knife Lake Lodge, boss Mike decided some of the management should get out and do some fishing. So off to Panama we went looking for tuna!

Day one was all travel to get to a private island and join Sport Fish Panama Island Lodge owner Shane at his amazing location. We arrived around 1 p.m. and spent the rest of the day snorkeling at the beach and checking out our new home for the week.

Day 2 began early and we were soon on our way to the tuna grounds. It turns out it should be called tuna hunting and not tuna fishing. Looking for birds hunting from the air and dolphins hunting from below are the first two steps.

After that Shane positioned us in front of the herd and the live baits hit the water. Everywhere we looked tuna and dolphins were breaching and frigatebirds were leading the charge of sea birds diving out of the sky, hitting the water and enjoying a feast.

BANG! Fish on! After 20 minutes Nolan gave up exhausted and passed the rod to Mike so he could take over the fight. Twenty minutes later a 90-pound tuna was in the boat. 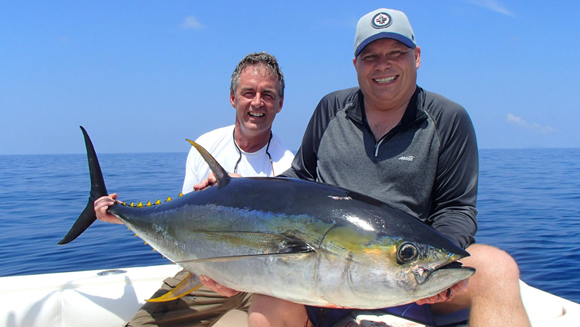 Mike and Nolan with Tuna #1!

We all figured that was the craziest thing we had ever seen, until it began all over again. This time Mike was casting poppers. We had talked earlier about how cool it would be to watch a tuna leap out of the water to attack a surface lure. And then it happened!

A gigantic tuna breached full body out of the water and came down hard on Mike’s 8-inch popper. Mike fought the beast from the deep for the first 30 minutes before handing the rod to Nolan to try and finish up. Nolan pulled on the second tuna for another half an hour or so and finally landed the monster. There was no official weight recorded but numbers thrown around by the Captain and First Mate estimated it to be over 210 pounds. It certainly looked the part in the photos!

Not to be outdone, Mike’s wife Jeanne showed the guys up when she pulled in an 80-pounder by herself. It was an epic battle but she held her form perfectly and somehow managed to get the giant into the boat. Shane and Juan were just as impressed as we were witnessing Jeanne’s fighting spirit! It was what fisherman would call a fabulous day on the water by any standards, and it just happened to be our first day on the grounds. 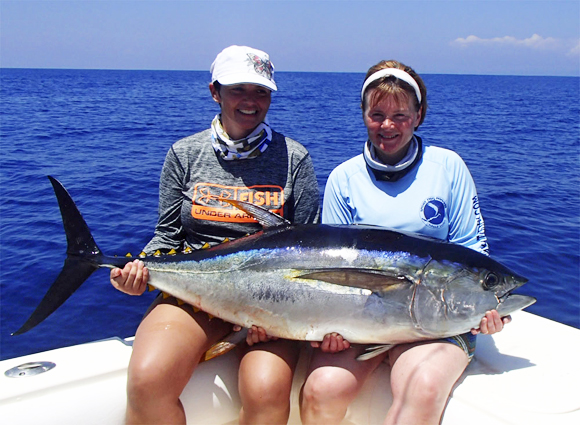 Doreen on the left, Jeanne on the right, with her 80-pounder!

Mike and Nolan were heading back to the tuna grounds bright and early the next day in an effort to top an incredible opener, while the ladies were set to enjoy some beach time and explore their island paradise. They would soon however, be back in tuna country.

And Doreen was already getting pumped up for battle.