A successful caribou hunt with Webber’s Lodges. Al Maki tells it like it is (was).

Home/Caribou Hunting, Guest Posts/A successful caribou hunt with Webber’s Lodges. Al Maki tells it like it is (was). 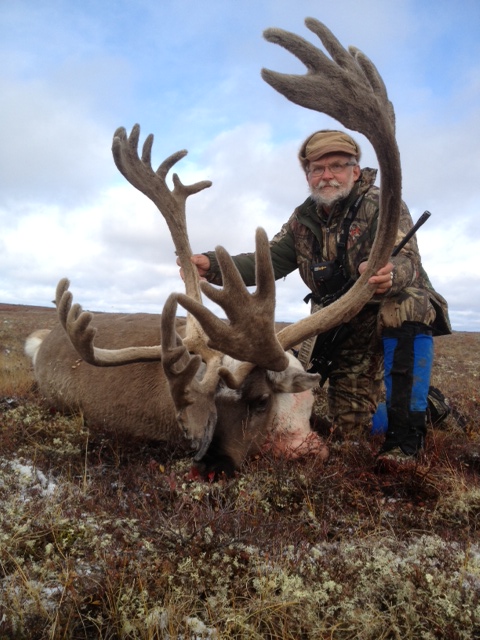 Al Maki with one of his two caribou bulls.

Ryan St. John is a well-established outfitter for all of the Arctic species of game. He recently merged with Webber’s Lodges to handle all logistics. Hunts leave by charter flight from Thompson, Manitoba and land at a float plane base just over the Nunavut line. From there hunters board Beaver float planes for a 1.5 hour flight to hunt camps located on the shores of the abundant lakes.

Flying in I was struck by the high percentage of water. It seems that 90 percent of the area is covered by lakes and ponds extending for miles. It didn’t look like any caribou habitat I’d seen or hunted. Camps are comfortable lakeside tents with a mess shed and resident cook. Hunts would leave each morning at daybreak in open skiffs traveling several miles in all directions in search of caribou.

The guides are all Inuit and are very familiar with the area and game patterns. Soon we began to see a few caribou in groups of two, three or more moving along the lake shore and crossing the water at will. My hunting partner and I drew straws for the first shot and I got the draw.

We saw a large bull with his harem of four cows on a small ridge so we beached the boat and made a stalk. They were moving our way but the wind was bad so they winded us and about-faced into the lake to swim to another peninsula. Our guide seemed to know where they were headed so we hopped back into the skiff and traveled down the lake a couple of miles.

Beaching again we scrambled up a small ridge and waited. Sure enough here they were, but they were out a full half-mile with no chance for us to close the distance. Back to the skiff and after a few more miles we rounded into a long bay and beached again.

After hiking a half-mile we crested a small ridge, and although I had my doubts, I was amazed to see our group of caribou moving down toward us. They would pass about 400 yards out. I rested over a small rock pile and waited for a clear shot. I ranged it at 417 yards and took the shot. The bull was hit hard but continued to move off. I shot again and he dropped.

I took another fine bull a day later and all of the hunters in the camp had a great time taking their two bulls by the fifth day of the hunt.