On the show road with Webber’s Lodges 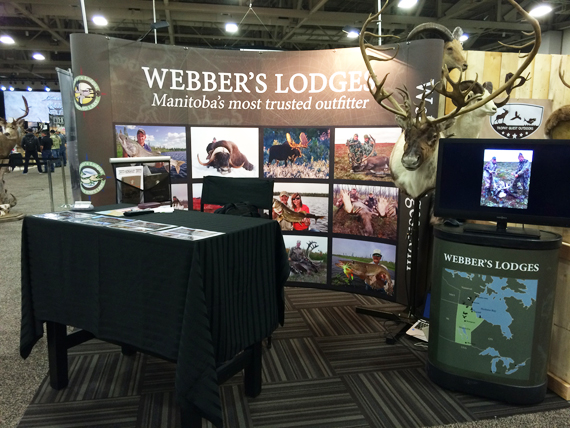 On January 18 I left the cold and snow of Manitoba for the warmth and sunshine of the southwestern US to exhibit at several shows. The first pleasant surprise was the cost of fuel, which was about half the cost of our tax-laden Canadian gas!

The warm weather wasn’t achieved without driving through a mountain ice storm in Idaho, but thankfully I arrived safely in Reno on schedule to set up the Webber’s Lodges booth at The Sheep Show, put on by the Wild Sheep Foundation. It was an incredible weekend, meeting several previous guests, as well as several potential new ones.

The new hunters had all kinds of questions about caribou, musk ox etc. The weekend itself was amazing. At the first evening’s banquet, I learned that Wild Sheep Foundation raised over six million dollars last year, and a huge majority of this money was put directly back into conservation. This group is proud of their mission statement to “keep the sheep on the mountain.”

The keynote speaker at the Saturday evening auction was an injured military vet. You could hear a pin drop as he told his story to several hundred mesmerized guests. Listening to him speak, you were overwhelmed by his passion and sense of duty to his country. On more than one occasion a napkin was used to wipe the dust out of someone’s eyes. It was a very humbling address.

Once The Sheep Show was over, it was off to Las Vegas for the Grand Slam Club/Ovis Super Slam Convention weekend show. This event is dedicated to some of the most well travelled and experienced hunters in the world. There were hunters from many countries at the show, and it was a pleasure to meet many of them.

I met a young man (14, I believe) who had begun his quest for a Super Slam, which means hunting all 29 North American game species successfully. And he is doing it all with a bow, no less, and filming it all for a television show!  What truly impressed me about this young man was the mature and respectful way he carried himself. We talked about him coming up for a Central Barren Ground Caribou hunt with us. I hope to be in camp when he visits! 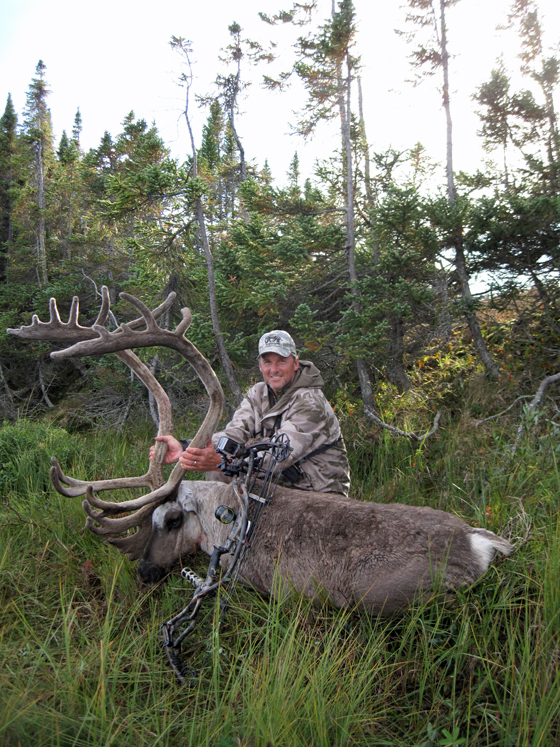 Another keynote address from a military man at the evening banquet continued the display of support this country has for their war heroes. It was a great evening, where he described overcoming his injuries and heading up the mountain on a sheep hunt.

Next up, I moved down the street to the SCI Convention at the Mandalay Bay Convention Center. By this time, I had acclimated to the weather and was running around in a t-shirt while, back in Manitoba I’m pretty sure they were experiencing the coldest week of the year. It’s a tough job, but somebody’s got to do it!

I had to be on my best behavior this week as big boss “Mike” was going to be joining me in the booth! Having both of us in the booth proved critical as many times we had more than one group of hunters visiting with us. Mike handled most of the ‘Where’s Doug (Webber)?” and “How are he and (wife) Helen doing?” questions, while I answered the simpler questions about the species we hunted and travel logistics.

We also had another hunt up for auction during the weekend. SCI is the largest hunting organization in the world, and some of the monies raised go into conservation. Another portion goes into protecting hunters’ rights, including defending the right to bear arms. There were thousands of hunters inside the building discussing improving wildlife habitat and how money needs to be spent for the benefit of wildlife etc.

Once the show was over, it was time to take a day to relax and enjoy the Superbowl! I enjoyed that, but they kept discussing Manning as being the oldest quarterback to play in the big game, and around the third quarter I realized he was younger than me!

My last show for the month was on the way home, in Salt Lake City. HuntExpo is put on jointly by another two conservation organizations, the Mule Deer Foundation and Sportsmen for Fish and Wildlife. Both these organizations are deeply involved in the conservation movement. More money was raised for conservation and military heroes were honoured. Keynote speaker Taya Kyle (American Sniper Chris Kyle’s widow) told an amazing story.

HuntExpo was great, and I was amazed to see how many young families were at the show, probably the largest representation of sub 12-year-olds at any of the conventions. Their enthusiasm made the last show at the end of a long month really enjoyable!

What was less enjoyable was driving back to Manitoba through two snowstorms. The light at the end of the tunnel was getting back home to my wife and son, and the wonderful people back at the office (who proofread this before it goes out)! Now it’s time to get back to work and catch up on the messages that have piled up over the last month!

I hear a muskox hunt calling!