How to field judge a caribou

In our first installment of field judging animals we looked at how simple it is to score Musk Ox. Well, you can forget about that this month. We’re going to look at the most confusing score sheet of all the animals in North America: the Caribou.

There are five species of Caribou, but all are scored the same way. The sub species our hunters are pursuing is the Central Barren Ground Caribou. When looking at all the different types of Caribou, each are known for very specific characteristics. Mountain are known for their incredible mass, Barren Ground for their long, sweeping main beams, Quebec-Labrador for their amazing width, and Woodland as miniature versions of their Mountain cousins. I believe our Central Barren Ground Caribou are the most appealing to the eye as they have a combination of all those features, plus long and palmated tops.  They also have a high occurrence of double shovels.

Because there are so many measurements on a Caribou, it can become a daunting task to guess sizes, and then do the math in your head to come up with a number that reflects the standard you’ve chosen for this hunt. We’ll do a quick review of the score sheet, so you understand where the numbers come from, then we’ll see if there is a quick way to determine if a bull is large, extra large, ‘oh my gosh’ large, or ‘I have to shoot that bull now’ large! 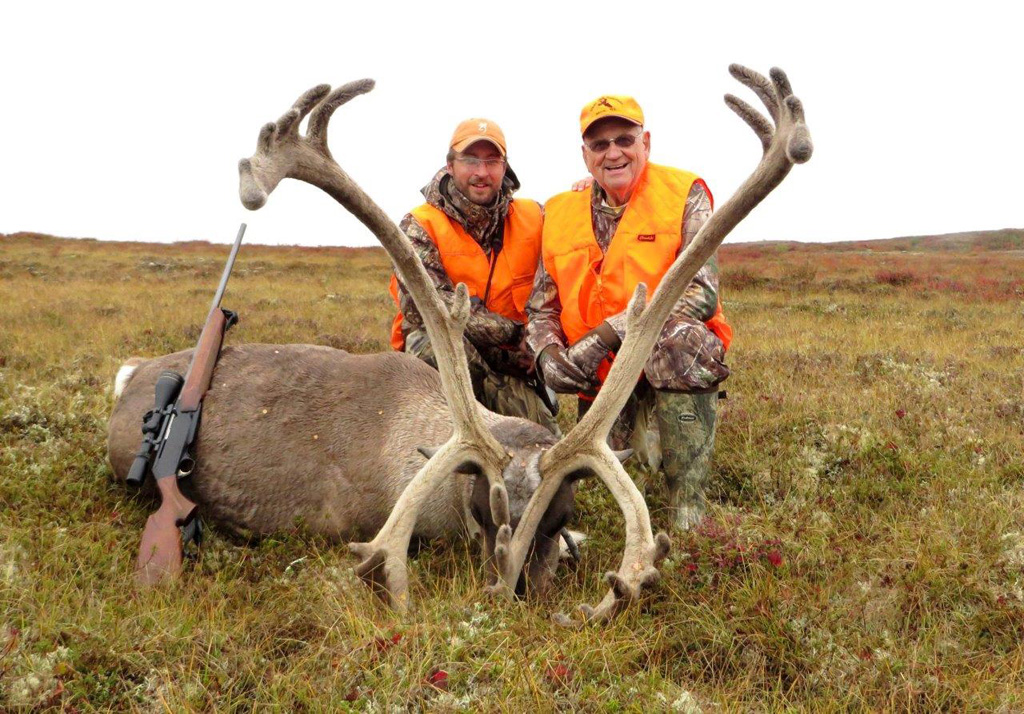 If two hunting buddies can fit between the beams, the bull is wide enough.

For Caribou, the first three measurements are inside width, number of points on each antler (excluding brows) and length of main beams.  This is what I would call the main frame of the animal.

The second group of measurements would be the length and width of brows, length of bezes, and length of rear points. I will refer to this as the ‘bottom end’ of the Caribou’s rack.

The last group of measurements would be the length of the longest two top points and width of top palms. You might have guessed by now, but I call this the ‘top end’ of a Caribou’s antler structure.

If you’re familiar with the score sheet, you’ll notice I haven’t really accounted for mass. The reason being, even though there are four mass measurements per side, the difference between a bull with ‘heavy mass’ or ‘average mass’ will make very little difference in the end. While there could be great discrepancies from one bull to another when it comes to the last, or highest circumference, this will be accounted for when we’re judging the ‘top end’ of the rack. 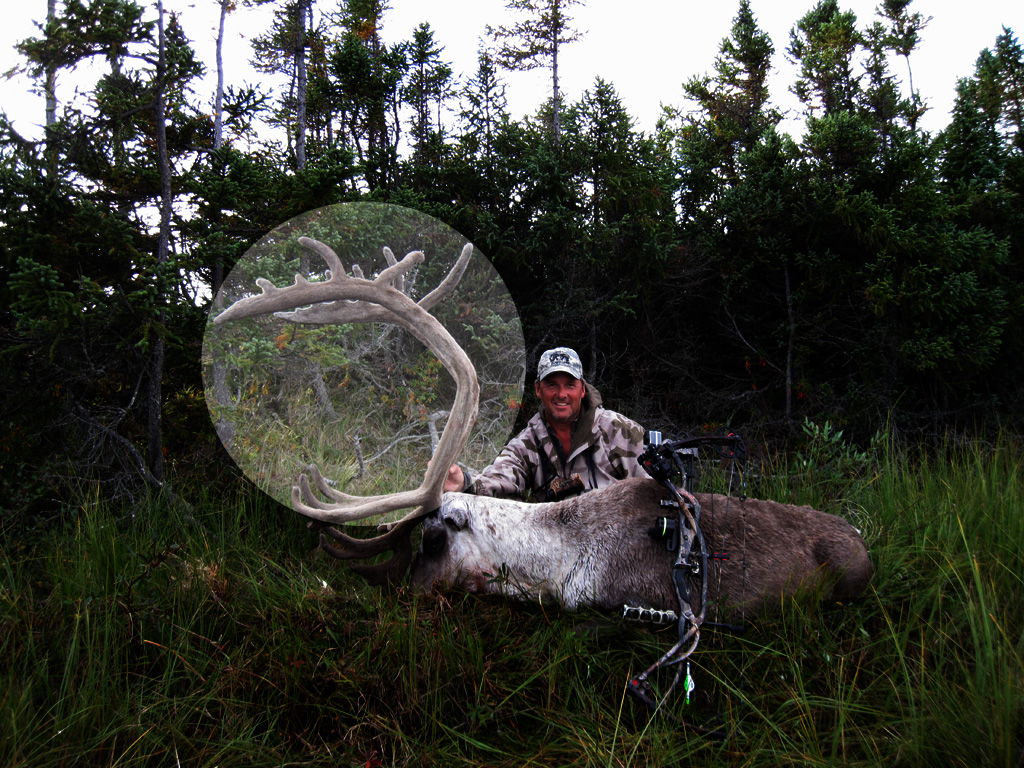 A better look at the ‘C’ shape. Mike Broadwell.

The first thing I notice on a Caribou bull is the main frame of the animal. I want to see the width well outside the girth of the animal for a decent inside spread. Next, I look at the beam length. In profile, I want to see a large ‘C’ created by the main beam, not an ‘L’ or partial arc. If the bull has his head down feeding, I like to see the top of the beam even with the shoulders. A bull with beams that high, decent width and tips coming forward will have a great start to his main frame. 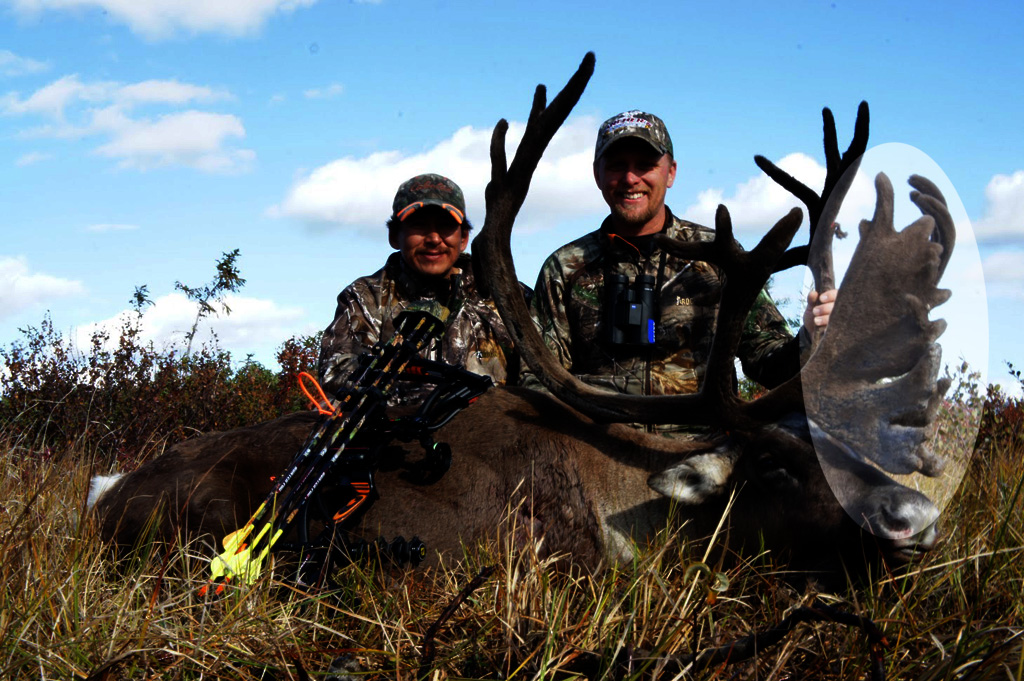 After checking those stats, I’ll do a quick check to see if there are a lot of points. You want to see a couple of long points on top, a rear point on each side (sometimes referred to as back scratchers), and a bunch down on the bottom end. I won’t spend too much time defining exactly how many points are on each side, I just want to know there is a bunch!

Next, I start evaluating the bottom end. Confirming a second shovel is great, as a second shovel is all bonus, but you want to make sure at least one of the shovels extends to near the end of the nose. You’ll also want to see good width on these shovels. I use a reference of the distance from the front of the eye to the tip of nose as a good starting width for the shovels. Counting points on the shovel is difficult, but again, just make sure you see a bunch! 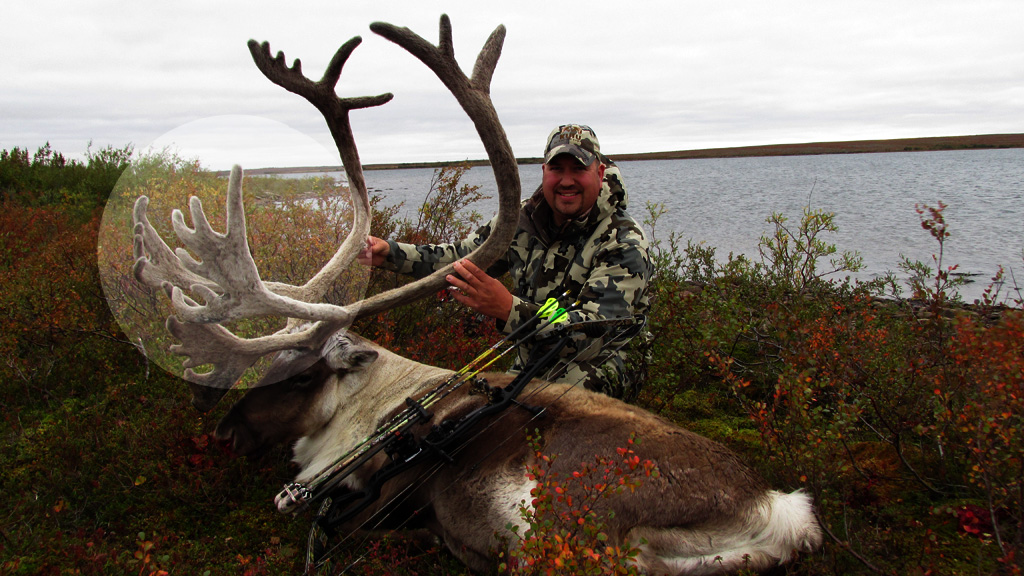 The bezes are hardly utilized in the scoring system. Just the number of points (which you have checked out during the main frame evaluation) and overall length. You want these to reach as far forward as the shovels to get a decent amount of credit for bez growth.

The top end of the antler structure is the easiest to judge. Being away from all the growth down low, the tops usually stand out against the background, especially if the Caribou do you a favour by walking a ridge top to skyline their antlers. 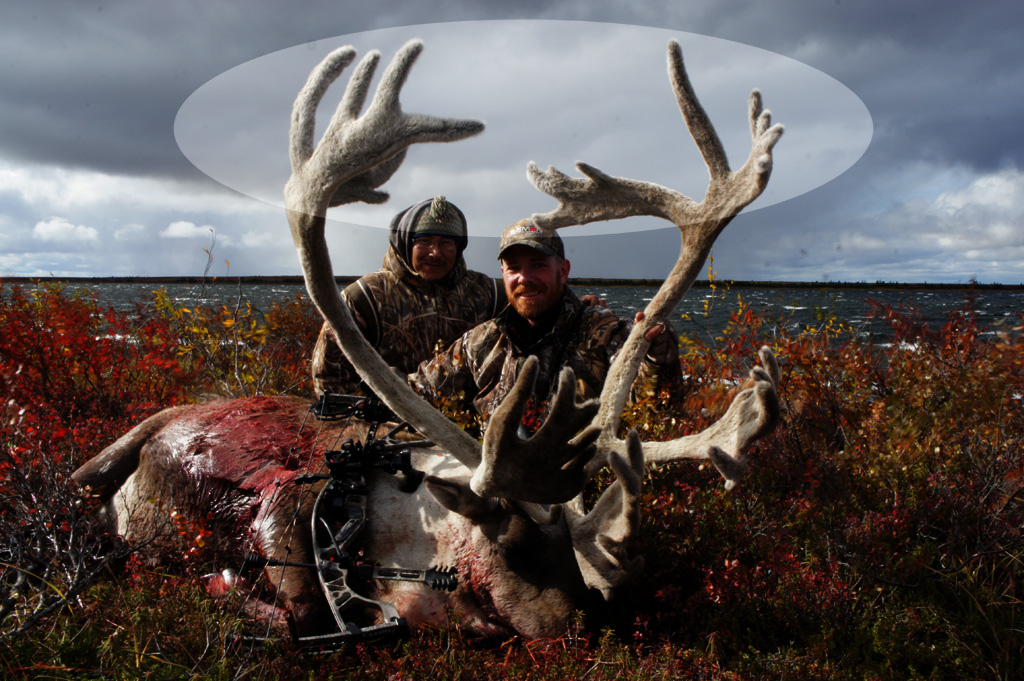 Lots of points are good, but for measuring, make sure there are at least two long points per side. Take a good look, as these points don’t always grow up from the top of the beams. Often, they will lean inward and actually be longer than they appear. Palmation up top is also important because it gets measured twice, once as a width and once as the last circumference. So, seeing a beam that is five to eight inches wide will really boost the overall score on a Caribou. 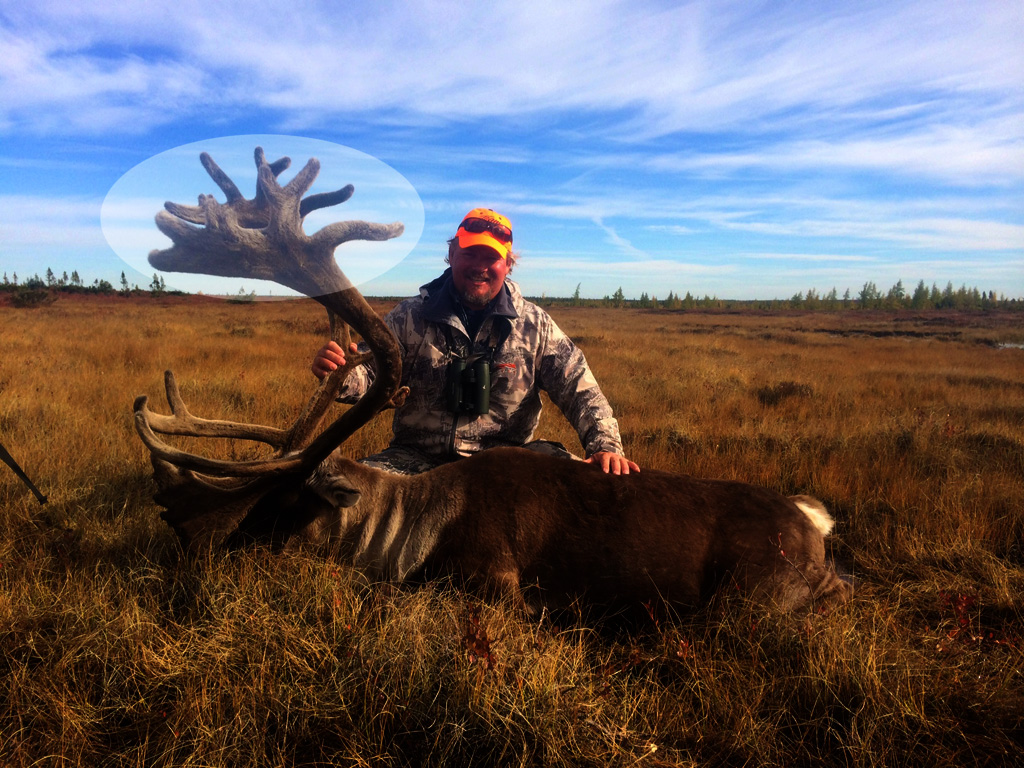 With all that being said, if you’re hunting Caribou for the first time, my suggestion would be to enjoy your time being in a special place few others are lucky enough to visit. Pick some blueberries while glassing and take in the other wild things you will encounter — wolves, ptarmigan, migrating geese. The hunt will be over before you realize it so don’t spend too much time on math. If you see a bull that looks good to you go after him and, if you’re lucky enough to tag one (or two) of these incredible creatures, make sure some gets prepared for you in camp. It will be one of the best meals you’ll ever have.

Now that you know how to score a Central Barren Ground Caribou, all that’s left is to book your hunt!