Home/Caribou Hunting, Newsletter/Caribou hunt at Webber’s proves to be experience of a lifetime for father-daughter team 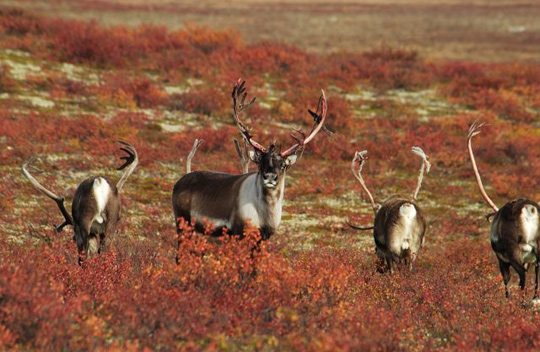 I have hunted with Webber’s three times, and I have hunted all over North America, New Zealand, and South Africa. This year’s hunt was one of the very best.

My daughter, Christine, wanted to share these experiences with me, so we planned a trip to Schmok Lake with Webber’s Lodges. Before talking about the hunt, I have to say that Webber’s integrity, staff, and organization are outstanding.

We began our hunt on the afternoon of arrival. Our guide was Robert Flatfoot, who is a first rate man and guide. We boated across Schmok Lake, hiked a mile across the tundra to a ridge providing a good view of a large area. In short order we spotted some caribou about 1 ½-miles away.

After a careful stalk we nailed a decent double shovel bull at about 330 yards. This proved to be the longest shot we took. The remaining caribou were all within 125 yards. The next day Christie nailed two nice bulls in the same area, about an hour apart with her .30-06.

Every day we hiked three to seven miles. The weather was mostly mild except for two days of strong winds and some rain. The Northern Lights were spectacular one night.

We were able to hunt on the last morning, before catching the float plane back to Churchill. Robert, Christie, and I went back to the same ridge where we had scored on before.

A good bull started running behind us with a few cows at about 125 yards. As I was raising my 7mm Mag a second bull, with better top points, ran past the first. I pulled up, placed the reticle on the front of his chest, followed through and dropped him. He was probably the best caribou bull of the camp.

We saw an arctic wolf, a large black bear and lots of migrating geese and cranes. The tundra was gorgeous with its fall colors and delicious blueberries everywhere. Despite the fact that the caribou migration had not started, there was plenty of game for us to hunt. Some years ago I witnessed the migration at Schmok Lake. Fantastic!

The experience of a lifetime.