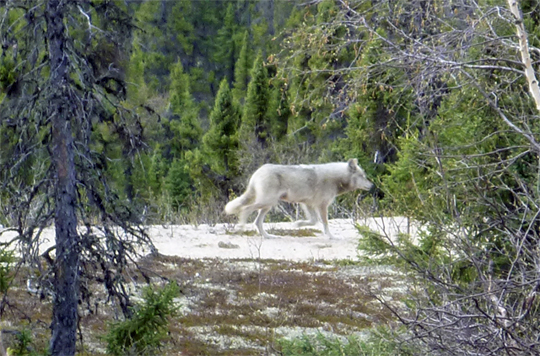 The wolf in charge. Always watching us.

Our decision to honeymoon at North Knife Lake Lodge in northern Manitoba was made years ago before we were even dating.

“You can’t honeymoon there, I’m honeymooning there!” we said to each other.

Little did we know (though by that time we may have hoped) that three years later we’d be honeymooning there – together!

North Knife Lake Lodge is the perfect honeymoon destination. That’s assuming you can stand 25 degrees C, sunny blue skies, no bugs, loons calling at night, long walks in the woods, canoeing and fishing on windless days and various animals providing endless photo opportunities. Every moment we felt like we were the ones being watched and studied, not the other way around.

Oh, and did we mention the wolf pups?

The honeymooners. Riley and Karli. At North Knife Lake Lodge.

As the plane flew off into the distance, we stood on the runway watching, wondering, if our decision to be completely alone in the Canadian north for a week was a good one. We started the hike back to the Lodge, hoping to return with the four-wheeler for our gear before any wild animals got into the groceries.

As we rounded the first bend on the trail, 25 yards ahead of us a big timber wolf stopped and looked back over his shoulder toward us. We froze and everyone watched each other for a moment, before the wolf trotted off into the bush. That was our first sighting of him, and afterwards, we knew he was never very far away.

The next morning, I was excited to show my new husband the wolf den that my cousin and I had discovered a little less than 10 years earlier. We packed the essentials — food, matches, water, camera, flashlights and rain jackets — and headed off toward a lake known as Wrong Lake. As soon as we were on top of the first esker off the west side of the runway, we saw the wolf again, trotting through the trees below us, about 200 yards away.

Every so often he stopped to look back at us, but wasted no time posing for pictures before he was gone again. We continued on toward the wolf den. When we were within a couple hundred yards, though we couldn’t see it yet, we decided to circle down below the den in case it was active. Though I had been to the den every summer since we’d found it, it had never been active to my knowledge. Still, on the off chance it was, we gave the den – and whatever wolves were around – some space.

We came up from the bottom of the esker about 50 yards from the den. As we approached the entrance, we could see that most of the grass around the entrance had been flattened, and that there were wolf tracks and caribou hair surrounding the entrance. Still, we weren’t sure.

I crouched down by the main entrance and looked down into one of the secondary entrances. Small tracks and some scat lay around the smaller entrance, but both looked too small to belong to a wolf. Maybe a fox though.

The trees at the den entrance groaned slightly as they swayed in the wind, and we chatted quietly, mulling over what we were looking at and wondered if the den was active. Until we realized that the groaning wasn’t the trees!

Suddenly, the groaning sound was joined by whimpers, grunts, snorts and whines, the sound a sleeping pile of puppies make when they all start to shift and jostle. I was beyond excited! As a young girl, I had always dreamed of finding an active wolf den and finally the day had arrived!

Since we knew the male wolf was around and now suspected that these puppies probably belonged to him, we left the den entrance and headed up over the top of the esker to make our way back to the Lodge. Sure enough, only 100 yards away, just on the other esker, that same wolf stood watching us. He was directly in our path but heading west, so we swung east to give him plenty of space to get back to the den.

That evening, we fished the creek north of the runway and brought a few fish home with us. We saved the guts and trimmings and decided that the next day we would take the fish remains out to the wolves to let them know we were friendly. The next morning, we set out early again, bucket of fish guts in tow. 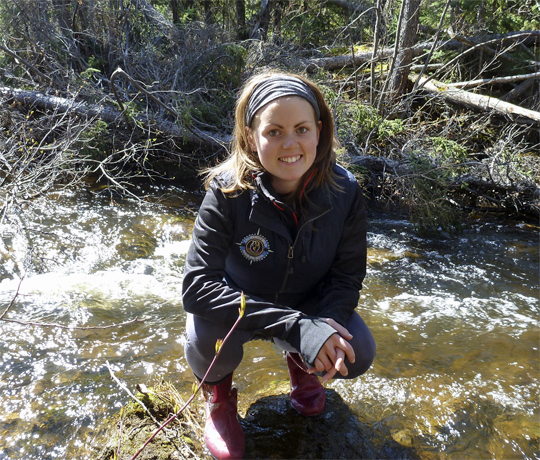 There’s fish in this creek!

When we arrived at the trail that would take us from the Wrong Lake esker to the den esker, we heard a bark behind us. We snapped our heads up and found ourselves looking at our wolf again, standing in the middle of a sand patch on the esker south of us. He barked again, and again, before letting out a long, low, howl, the kind that makes you pay attention. He seemed agitated and continued to bark and howl over and over.

We waited for a response from another wolf, but there was none. We guessed that he was trying to draw us away from the den or warn his mate of our presence. We decided not to go back to the den, but to leave the wolves as they were before we showed up, so we dumped the fish guts where we stood and started walking straight toward the wolf. He watched us coming towards him for a moment then disappeared over the edge of the esker.

We stopped on the same sand patch where the wolf had stood and had our lunch. Afterwards, we were making our way home and as we emerged from the trees, the wolf appeared on the edge of the runway. Again, we stopped to watch each other, before both parties crossed the runway and continued on our paths back to the Lodge. There is nothing quite like the feeling of knowing a wolf is escorting you back to your home and away from his.

Riley and I agreed that we wouldn’t return to the wolves’ esker after that, but still each day we saw the wolf. Nearly every time we crossed the runway we were guaranteed to see him there, a few hundred yards off, watching and waiting to see which way we would go. No matter where we went, we had a feeling that he was nearby, adding an element of mystery to all our hikes.

One day, we crossed the runway with the wolf and stopped on the east edge to watch him. He stopped as well and sat down, facing us. Suddenly, he threw back his head and howled, barked, then howled again. We watched and listened in awe for a few minutes, before deciding to try our own barks and howls. We were pathetic at first – we sounded more like scrapping cats than wolves – but as we got the hang of the low, deep, drawn out howls, our wolf started to respond to us.

What’s a honeymoon without a wolf?

Surely he understood everything he was trying to communicate and probably wondered what foreign dialect these strange creatures were speaking.

When our voices started getting weak, we made our way back to the Lodge, with our escort slipping in and out of the trees, unseen and unheard, but definitely felt.

Now the Lodge sits empty again, and I imagine a den of puppies somewhere grows bigger and stronger every day, practicing barks and howls, uninterrupted by worries or cares and enjoying the magical wilderness at North Knife Lake.

A special place we were lucky enough to be a part of for one fabulous honeymoon.