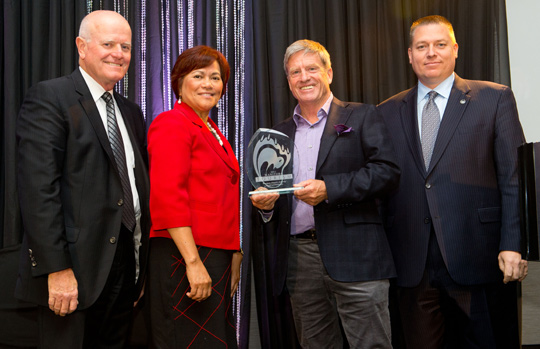 Our own Doug Webber, founder of Webber’s Lodges, was recently honoured by Travel Manitoba at the Manitoba Tourism Awards, as the recipient of the Winnipeg Airport Authority Award of Distinction.

Doug has played an integral role in the development of the Manitoba hunting, fishing and ecotourism product inventory for the past 45 years. He has set industry benchmarks for service and quality and has always been focused on continuous improvement of his products and facilities.

“Travel Manitoba and the MLOA have been invaluable resources for us over the years,” said Doug. “I owe them, and many others, especially my family, a big thank you. Nobody accomplishes these things on their own. This award is quite an honour.”

During his term as mayor of Churchill, Doug hired an economic development officer, with the goal of finding ways to diversify offerings in Churchill. He was also asked by Travel Manitoba to act as the Churchill Ambassador/Tour Guide for Italian royalty. During his time as MLOA President, Doug was actively involved in the development of a handbook for new lodge start-ups and he has been tireless in his goal to share his vast knowledge of lodge operations, customer service and product development with all those with whom he comes in contact.

Doug has also been responsible for, or involved in, the development of 10 separate lodges and outpost locations in Manitoba and has hired, trained, and mentored countless students, aspiring guides and bush pilots, and First Nations peoples.

“I think at one time everyone who was running a hunting lodge on the Manitoba coast of Hudson Bay was one of our former employees,” said Doug. “Our first guides were three Chipewyan men from Tadoule Lake and three Cree men from Churchill. Helen (Doug’s wife of 47 years) went to school with many of the First Nations people that would later work for us, and they were actually the reason we started North Knife Lake Lodge in 1976.”

Doug has been directly involved in the Manitoba tourism industry as a goodwill ambassador; has worked with Thompson Spirit Way to develop a Thompson/Churchill connection for the benefit of both communities; and has raised the bar for quality of service and accommodations with regards to offering guests memorable, value-added experiences.

The Webber family, Doug and Helen, daughters Jeanne, Shari, Toni and their partners and grandchildren, has built an international reputation for exceptional customer service, fabulous food and world-renowned fishing, hunting and ecotourism destinations in Manitoba.

It’s been a long journey from that first lonely canvas-covered Quonset hut on Dymond Lake 30km north of Churchill in 1967, to the establishment of four world-class eco-lodges that now include Dymond Lake Lodge, North Knife Lake Lodge, and through daughter Jeanne and her husband Mike Reimer, Nanuk Polar Bear Lodge and Seal River Heritage Lodge.

In 1972 Doug bought out his first partner and turned the property into what is now known as Dymond Lake Lodge, which operates as a goose camp and an ecotourism destination. In 1974 he made his first foray into the Manitoba guided fishing business by leasing a property on South Knife Lake and in 1975, he obtained the necessary permits to begin construction of  North Knife Lake Lodge.

In 1976, upon learning that Churchill’s only chartered airline was going out of business, Doug recognized that northern Manitoba’s tourism industry would suffer and took the necessary steps to help prevent this. He became a licensed pilot and started Dymond Lake Air Services Ltd. Today he is one of the most experienced commercial bush pilots still flying in Manitoba.

“And probably the oldest,” said Doug.

Since the beginning, Doug has had an unwavering commitment to sustainability and responsible tourism which often set him apart from others. He was dedicated to these practices long before they became industry norm, beginning with recycling, composting, water conservation and flying out garbage to licensed dump sites in the 1970s, to on-site gardens, raising chickens for eggs and the use of local foods.

The imaginative use of local foods was a major factor in the creation of the delicious recipes found in Webber’s Lodge’s award-winning cookbook series, which was co-authored by Helen Webber and Marie Woolsey.

Doug was the first fly-in lodge operator in Canada to implement consistent solar and wind generation technology at all his lodges, resulting in a 75% reduction of fossil fuel consumption and noise pollution over the last 25 years. His commitment to the environment and ecotourism best practices have inspired both guests and fellow lodge owners to respect the pristine landscape surrounding his lodges and out camps.

Continuously seeking out new ways to demonstrate his commitment to the preservation of the environment, while also maintaining the level of service and product quality his guests have become accustomed to, Doug recently purchased a new generation wind turbine to place at North Knife Lake Lodge, which will further enhance the use of naturally sourced power.

Doug now maintains a supporting role with Webber’s Lodges as an advisor, consultant and offers ongoing marketing and operational support. He brings a wealth of knowledge and insight to the development of new tourism products.

“I could never have done any of this without the help of my family,” said Doug. “They’ve been with me every step of the way from that very first summer. Everyone helped out every season. They’re the main reason for our success and for our repeat customers over the years. All of our lodges are family-run and many of our guests appreciate that. Success is a team effort. My family deserves this award as much as I do.”