Wolf families back with new pups at North Knife Lake 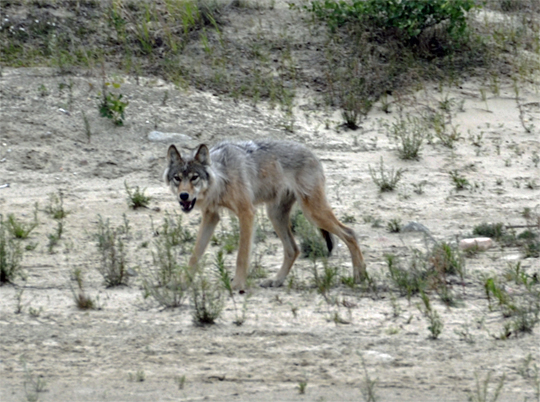 It’s been a banner year for the wolves of North Knife Lake!

Saw the big Momma, two of her offspring from last year and two pups about three months old, all at the runway in the evening a few weeks ago. In total, we have seen seven different wolves so far this spring and summer!

All have typical timber wolf colouring with one having distinct reddish tinges on its side. Pups are sandy coloured and they look well fed, quite chubby actually. All the fish must be going to them. The adults did quite a bit of howling and one disappeared into the bush after doing the bark-bark-bark-howl bark-bark-bark. The wolf that stayed on the runway continued to bark-howl-bark until we left.

Josh went ahead with the 5-wheeler while we walked. A big wolf came out of the bush at the sand bowl and followed him until the turnoff to the equipment grounds. What an evening! About 30 trout caught at Hahn Hole and fishing in front of the Lodge. We kept a couple for eating and released the rest. Two were master anglers!

A few days later we had more wolf sightings down at the runway. We took some fish trimmings out to them, howled and waited. After about 10 minutes we noticed something moving at a hill to the south of a turnaround.

It was a small pup lying down in a bit of a washout. We got a few photos before it disappeared into the bush. We drove back to the Lodge and while I was cleaning pails the adults started to howl, so Norm and I drove back out to the runway.

We saw four pups, two with the momma, one black and one gray, and two off by themselves near the turnaround. Momma was on the south hill with the black and gray ones. So far we have seen Momma, papa, three smaller ones that we suspect are last year’s pups and four pups from this year.

One of the young adults is very brave and has come within five meters of us on the 4-wheeler. She shows up pretty much right away when we arrive at the runway with supper. Another one or two wolves generally happen along five to 10 minutes later.

The wolves have also been getting close to the Lodge a couple of times a day. We’ve only seen them outside the Lodge on three occasions, but we see their tracks at least once a day.

I can’t tell you how wonderful it feels to have the wolf families back at North Knife Lake Lodge.

It’s a magical time… in a special place.