Bow hunting for moose pays off at Small Lake for Kenney 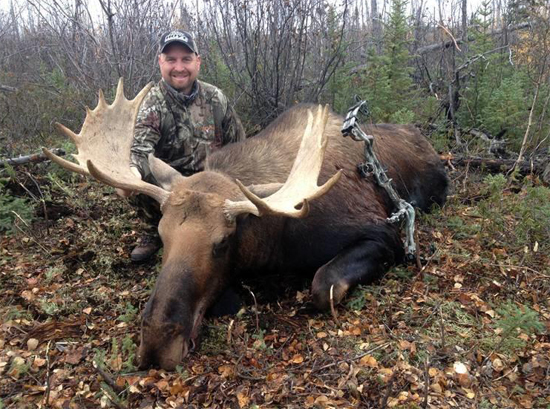 I was hunting Small Lake north of Thompson, Manitoba. For the first 2 1/2-days I didn’t have much luck. I never saw a moose. But moose hunting is either hot or cold, and I knew that going in. I did see plenty of sign, so I knew there were moose around.

Two of the other guys in camp actually got their bulls on the first three days. On the fourth day the weather turned more favorable for moose hunting. It started raining and got colder. That morning we spotted what was a definite shooter, probably a 50″ wide bull. We tried to make a move on him but he just disappeared. While it would have been awesome to get on this bull, it definitely lifted my spirits just seeing a huge moose.

On the fifth day we spent the morning working an area near where we had seen the big bull. We hiked in with the wind in our favor and my guide Tyler did a bunch of cow calls and bull grunts. Alas, not one response. Finally, after several hours, we called it quits to get some lunch. After lunch we headed back out with a plan to hunt a different area.

As we were cruising along in the boat, Tyler spotted a bull up on top of the hill where we had been hunting all morning. We knew it was a different bull, but he looked to be a shooter. Tyler eased the boat into a place on shore to get the wind in our favor. Since we didn’t get any responses to our calls in the morning, we opted to just stalk in on the bull. I walked right behind Tyler, so we would sound like a moose walking through the bush.

Once we got within 80-100 yards of the bull we could hear him grunting and raking trees. There was not a lot of time to set up. Tyler moved to a position 15-20 yards behind me. He did not call; he just did some raking with his moose scapula. The bull was very agitated with this! He started walking indirectly toward us in a zigzag pattern. The bull stopped every 10-15 yards to rake the trees and was grunting the whole way in. He was swaying back and forth with drool running out of his mouth.

It happened pretty quickly. I felt like I was sitting in my living room watching a hunting show on TV!  The bull got to about 10-15 yards and I was trying to figure out how to get a shot off. Tyler was whispering for me to draw my bow, but he could not see that I had no shooting lane from where I was standing. I tried to move a step forward for a clearer shot, but this seemed to alert the bull. He then turned in the other direction and walked perfectly broadside. This time I drew my bow back.

He stopped at 12 yards and I put my pin right behind the shoulder and let the arrow fly. At this angle I had more of a shooting lane then I did on the first shot opportunity, but it wasn’t perfectly open. My arrow may have deflected, so the shot was not great. I ended up being about 3″ too far forward (and a little high). My arrow caught the back of the shoulder blade, so I did not get a pass through.

We both took our boots off to stalk in for another shot. The bull was lying down but still moving his head around and coughing. I was standing about 30 yards from him when he stood up and I was able to get off another shot, but that completely missed due to all the branches in the way. Luckily he fell back down so I could get closer. At 10 yards away he stood again. This time I put my arrow through both lungs. He looked like he was going to charge us, but luckily he just started walking sideways and keeled over.

My guide Tyler did an awesome job! He actually got three moose in four days. (He guided the other two guys in camp first and then took over with me when they tagged out.)

From start to finish it took us about six hours to get the bull out of the bush. We were 250 yards from shoreline and we used a chainsaw to cut a trail in. This made it much easier to pack him out. The moose was caped and deboned in the field.

One of the most impressive things to me about Webber’s Lodges was that their number one concern was putting me on a bull. It didn’t matter how far into the bush we had to hike. Going into the hunt I was worried that all we were going to do was drive around in a boat. Obviously it is a lake hunt, so using a boat is an important part of the hunt. As far as deciding what technique we used, and where we hunted, I just left that up to the guides. Another worry was the fact that I was going to go bow only or nothing. The guides did not see my bow as a hindrance to the hunt.

All in all it was an awesome hunt! By far the most exciting hunt I have ever experienced. It felt surreal, because it was everything I could have hoped for. He was not a huge bull, actually I think he was the smallest moose harvested this year by Webber’s Lodges. He was the only one taken with a bow. My bull was 39″ wide. The other bulls taken ranged from 40″ to 57″. To be honest, the quality was much higher than I expected. I guess now I have a reason to try to go back for a bigger one someday.

I think I am going to be on cloud nine for a while after this. It definitely makes me want to get out there for another hunt. Moose, elk, caribou, any big game animal really.

This type of hunt, when you have to go after the animal, is exhilarating!