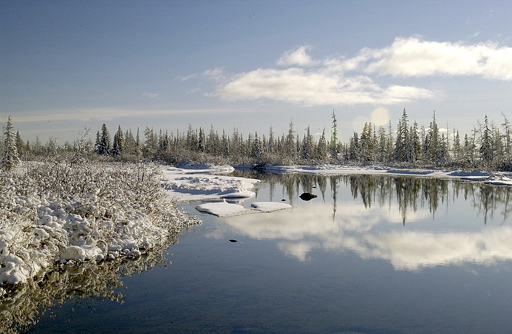 Well, the first 24 hours were pretty exciting. I landed on the ice at 5 p.m. in 25˚ C temperatures. Yes, the ice is still right up to the shore. I parked 30 meters off the end of the dock.

The first thing I noticed was the massive amount of fallen trees, mostly tops. There must have been a big ice storm in late winter or early spring. Next were wolf and bear tracks, and it soon became evident that Mr. Bruin had been busy.

Several screens were compromised and a bunch of stuff at the back porch was “rearranged.” I did a quick check inside the Lodge and found nothing amiss, but I did have three voles and a squirrel that paid the ultimate price for breaking and entering.

As I was checking out the tree damage from the upper deck of the Lodge, a bit of movement near the shop caught my eye. I’m sure it was the same momma wolf from last year checking the place out. Looking for a handout maybe? She may have caught sight of me, as she soon disappeared into the trees and that was the last I saw of her.

Half an hour later as I was preparing supper and noticed a black bear coming down the path from the shop. I had put some goose carcasses out for the momma wolf and the young freeloader was coming in for a bit.

I grabbed the shotgun and fired a couple of scare cartridges his way. He took off as if all the spooks in Hades were on his tail! I’ve got a hunch it was the same juvenile delinquent that trashed the Lodge. If he comes back again, he’ll make a nice rug!

The next morning I took a hike out to the runway with my faithful bucksaw and cut up over a dozen trees that had blown down across the road. There was very little erosion damage on the runway and it looked pretty well the same as it did when I left last fall. There were a lot of moose signs (both tracks and nuggets) up and down the runway, including two sheds from two different bulls.

I had placed a salt lick out at the runway hoping to attract moose, but from all the wolf scat around it, it looks like the wolves have taken it over. Quite a few bear tracks were intermingled with the wolf tracks. They appeared to be about the same size as the ones around the Lodge.

A Peregrine Falcon flew over to check me out as I walked to the creek to see if any ice was left. Only a little back bay by the beaver house had ice on it and it was open almost right to the lake. Pike fishing will be just great!

There were a couple of Canada geese nesting nearby as well as mergansers, mallards, and a few other species I didn’t get a good look at. There were also a couple of different warblers, as well as an army of yellow-shafted Flickers around the Lodge. It seems the Flickers like our accommodations too!

Well, after that epistle, I am all rested up again, so I’m off to haul some more “stuff” up from the airplane and get rid of a few more trees. Looking forward to our first guests of the season at North Knife Lake Lodge!

Have a nice weekend!