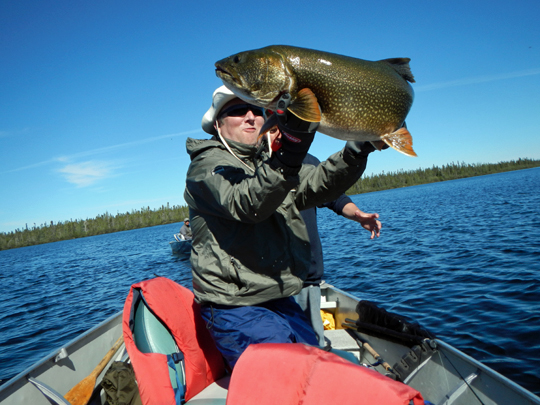 We’re off to a great start at North Knife Lake Lodge with the first group of fishermen busy retraining our great northern pike and monster lake trout!

After a very cold winter and late snow storm we were expecting we might well be practicing our “Russian Icebreaker” techniques on the lake, but other than a bit of ice piled on the northern islands there is nary an “iceberg” in sight.

And temperatures have been on the pleasant side to say the least, with most days being sunny and warm temps into the 70s and 80s!

The big fish are turning on and some crazy pike numbers in excess of 200 fish per boat are coming in after the first two days, as well as tall tales of big ones lost and released.

Our resident wolf family is comfortably ensconced in their summer digs up on the esker near the airstrip. We have yet to see the pups but have had some incredible close encounters with Mama and one of the “uncles/aunties” from last reason. What a treat!

World class fishing, spectacular wolf viewing and the finest food and accommodations in Northern Canada all in one fabulous paradise, though that might be a slightly biased opinion!

The Canadians surged ahead of the Americans today giving a strong showing with three Master Angler lake trout caught and released using their advantage of home “ice.”

Ron Malech astounded us with his unorthodox but very effective airborne release style claiming that this technique is favoured by all the fishing Hall of Famers.

He was later spotted recuperating on the lodge couch, no doubt exhausted from his spectacular performance. Fishing partners Tim Burt and David Brandt also scored on trophy lake trout and Reagan Caskey held up his end of the boat with some very nice northern pike.