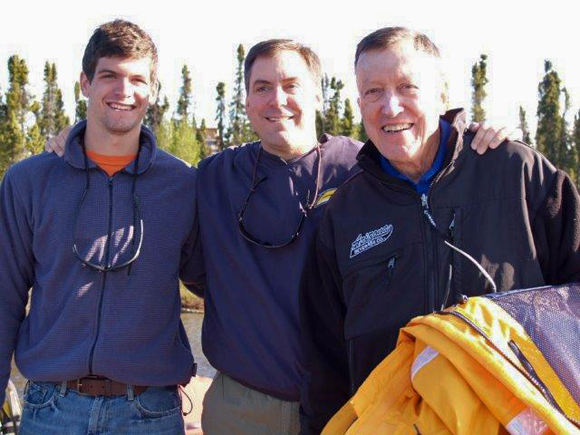 They came for the fishing and stayed for the family.

Twenty years ago, Gene Vukelic, Chairman of Try-It Distributing Co. Inc. in Buffalo, New York, was part of a large group on a Labatt-sponsored trip deep into the heart of polar bear country to see the great white bears on Canada’s Hudson Bay coast. They stayed at a remote polar bear lodge near Seal River owned by the Webber and Reimer families of Manitoba.

Two years later the Vukelic family returned for another trip with the Webbers and Reimers, but this time it was for a fishing adventure at Webber’s Lodges’ North Knife Lake Lodge.

“We’re coming up with five sons and seven grandsons this year. We’ve got good fishing around Buffalo and we have a place in Parry Sound on Georgian Bay where we fish for northern pike, but the big difference between fishing here and fishing at North Knife Lake is the natural environment, the outdoors. And we can catch between 150-200 fish per day. Sometimes they’ll strike as soon as the lure hits the water. Other times we’ll be reeling in a smaller fish and a big pike will grab it. We use barbless hooks and the guides are very careful with the fish. It’s all catch and release.” 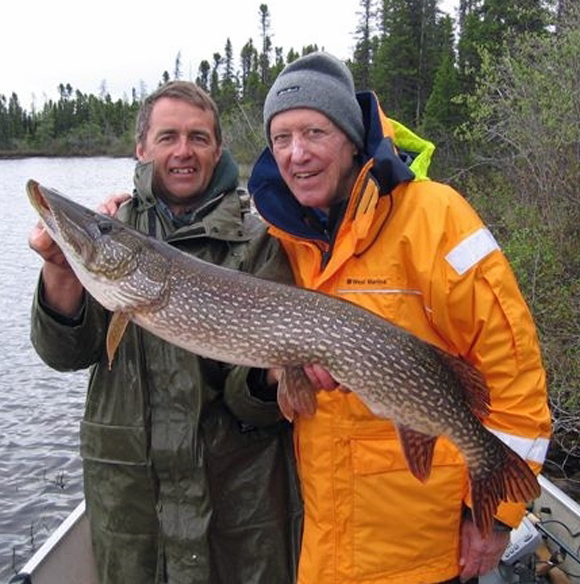 Gene especially enjoys the shore lunches and the camaraderie that has developed between the two families over the years.

“The shore lunches are phenomenal,” he said. “Every day is different. My favourite is still the fried fish fresh from the lake, with home-fried potatoes and corn and beans out of the can. The big breakfasts, sitting around enjoying the cocktails… the kids might watch a movie after dinner and we’ll be out on the deck smoking cigars.

“One night we’ll have a pizza party. All the guides come in showered up, Master Angler awards are given out. We always enjoy talking to the guides, learning about their lives. We talk about hockey, football and we always try to bring up some Buffalo Bills and Buffalo Sabres merchandise or something for them. The guides, our sons and grandsons have formed strong bonds over the years. We have a great time and we’re very respectful of the staff.” 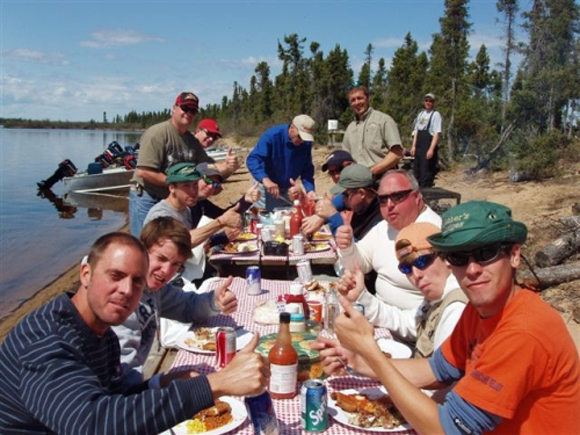 That first fishing trip 20 years ago brought the two families together for a second time and the relationship flourished over a mutual love of fishing, similar family values and a strong work ethic. The successes and similarities between Try-It Distributing and Webber’s Lodges, now in their third and fourth generations as family businesses, are understandable based on the backgrounds of the family patriarchs.

Both Gene Vukelic and Doug Webber have built multi-generational businesses with “sweat equity” as the main ingredient and a supporting cast of virtues that includes trust, dignity and commitment.

And both men were born between 1930 and 1945 into the “Traditional” generation, which is defined by characteristics that include an unmatched work ethic, discipline, loyalty, love of country, a strong sense of right and wrong and traditional family values. “Traditionalists” survived The Great Depression and World War II, and their era includes some of North America’s greatest innovators.

Gene’s father Stephen arrived in North America from Croatia in 1904 at the age of four with his parents. Gene grew up near a steel plant in Lackawanna, New York, and spent his childhood living above his grandparent’s successful restaurant with his Mom and Dad.

“They were good cooks,” said Gene of his grandparents. “All Yugoslavians are good cooks. I worked in the restaurant, washed dishes, did running around… When the restaurant was sold I went to college and then joined the United States Marine Corps for two years. After that I worked for General Motors and that’s when my father asked me to take over the distributing business. We started out with virtually nothing, worked seven days a week and my wife Carole raised all the kids.”

Gene took over Try-It Distributing in 1960, 32 years after his father had started the business and guided it through part of the Prohibition Era (1928-1933). In 1933 the company became a beer distributor and in 1946 they acquired the rights to distribute Anheuser-Busch products. In 1949 they started distributing Labatt products. They had six trucks and 12 employees. 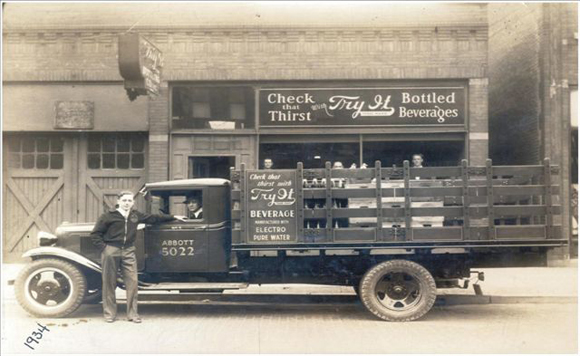 Try-It Distributing now has 520 employees including four of Gene’s sons, three nephews and three grandsons. They’ve grown through acquisitions and subsidiaries that now include Balkan Beverage, Try-It Wine & Spirits and Saratoga Eagle Sales & Service. And they are the largest distributor of Labatt products in the world.

“Labatt has been very good to us,” said Gene. “Canadians are great to do business with. Honest, forthright and trusting. Exceptional associates. The Canadian experience is wonderful. Canada is a very special place. It’s a great country.” 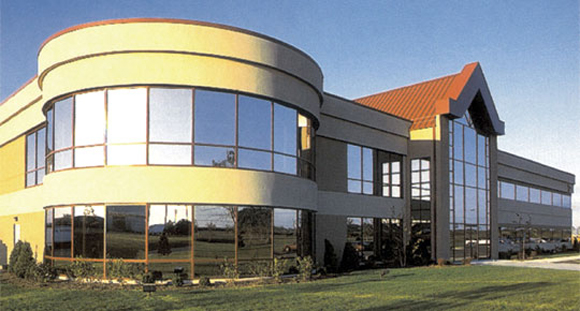 Try-It Distributing advances education about responsible consumption of alcohol in awareness programs that include both schools and media, and is a major supporter of numerous organizations and charities. Try-It Distributing staff and management serve on a number of community boards and the company has received several national awards including a “Family Business of the Year” Award from Canisius College.

“We’re very active in supporting community organizations, schools and hospitals,” said Gene. “We found that the more we give the more successful we are. The guy upstairs takes care of you. We’re very proud of the fact that the Vukelic family is highly respected in the community.”

Both Try-It Distributing and Webber’s Lodges possess traits that are found in almost all successful businesses — a strong set of morals and values that have been passed down through generations of family members, and a hiring process that looks for the same when bringing on new employees.

“It’s like a three-legged stool,” said Gene. “Trust, dignity and commitment. Our job as a family is to keep the business secure and safe. When we hire we look for those three legs. We treat our employees with dignity and respect. We like to call them stakeholders and we have an obligation to all 520 of them to improve the quality of their lives. We offer good jobs, incentivize our stakeholders and make sure they are fulfilled in their jobs. We have the same commitment to our customers.

“We look for good people who work hard and who pay relentless attention to detail and preparation, who have the courage to go to work every day, to look after family obligations, and to face any issues that arise head on and deal with them. Our stakeholders make us valuable. We have to trust in family, ourselves and our stakeholders. This results in trusting relationships with our customers as well as with the community at large.” 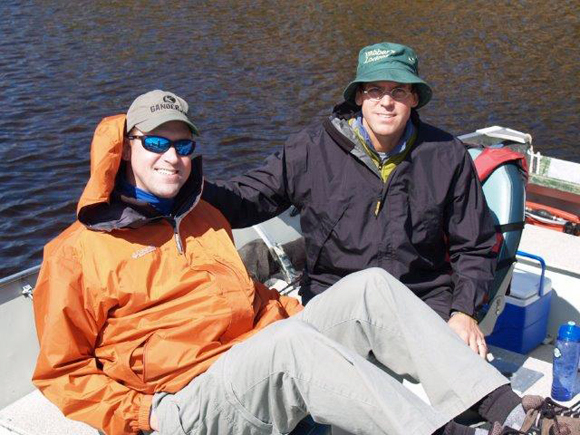 Jeff and Tim Vukelic relaxing in the boat on North Knife Lake.

The similar family business philosophies of Try-It Distributing and Webber’s Lodges have been heavily influenced by their respective patriarchs and founders, and the resemblances don’t end there.

Doug grew up in Stettler Alberta and worked on farms belonging to relatives during the summers before taking a job in an uncle’s Chrysler dealership. He then joined the Royal Canadian Navy and was stationed in Churchill, Manitoba, where he met and started dating wife Helen, a third generation Churchillian who also happens to be the co-author of the award-winning cookbook series Blueberries and Polar Bears with co-author Marie Woolsey. Helen and Marie have been preparing delicious meals for guests at Webber’s Lodges for almost 50 years, and they’ll be back at North Knife Lake Lodge doing it all over again in 2016.

Doug spent his leisure time hunting and fishing, often with friends of Helen, and his first real adventure came in 1967 when he took part on an expedition to York Factory to bury a time capsule. Shortly afterwards, he and a friend purchased a goose camp at Dymond Lake and he became an “official” hunting outfitter. Doug bought his friend out in 1972, started to build North Knife Lake Lodge in 1976, and began a family legacy that has been heavily involved in the community and in the development of hunting and fishing tourism in Manitoba.

A licensed pilot, Doug has now been responsible for, or involved in, the development of 10 separate lodges and outpost locations in Manitoba and has hired, trained, and mentored countless students, aspiring guides, bush pilots and First Nations people. 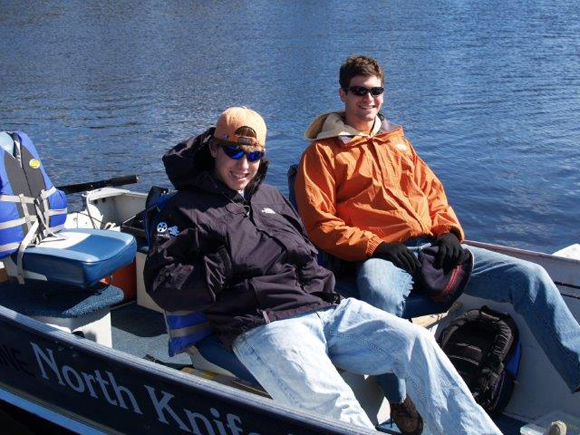 Grandsons Christopher and Gregory Vukelic. The next generation.

“I could never have done any of this without the help of my family,” said Doug after winning the award. “They’ve been with me every step of the way from that very first summer. Everyone helped out every season. They’re the main reason for our success and for our repeat customers over the years. All of our lodges are family-run and many of our guests appreciate that. Success is a team effort. My family deserves this award as much as I do.”

Like the Vukelic family, the extended Webber family has been intimately involved in the expansion and success of their tourism business. Wife Helen, daughter Shari, daughter Toni and her husband Nelson, daughter Jeanne and her husband Mike have all been major contributors to the development and growth of Webber’s Lodges over the years, as have many of their children, who are now helping to instill the company culture of service and value in employees and future generations. 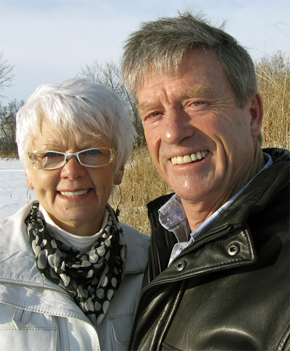 Mike and Jeanne Reimer also now own and operate three remote lodges on the Hudson Bay coast, where they have pioneered the world’s first and only on-the-ground polar bear safaris using the same unique culture. It all started with Webber’s Lodges.

“Doug and Helen and their families are special people,” said Gene. “They treated us so well that we started to bring our sons and grandsons.”

“All the kids and grandkids that can make it to North Knife Lake when the Vukelic family is there will be there,” said Doug. “It’s like they grew up together. They wouldn’t miss it for the world.”

Doug’s feelings for the Vukelic family, for North Knife Lake Lodge, for his family and his customers, are mirrored as he stands on the edge of the dock and points proudly into some of the most pristine water in the world, at a thriving school of northern pike minnows… the next generation.

“It doesn’t get any better than this,” he says.