Imagine casting your fly into a pool of water that has never seen a human and having it attacked by a voracious 20-inch brook trout of the same bent.

The winner is the trout that gets there first. And you

“It was incredible,” said Brian Irwin, the New England Field Editor for Fly Fisherman Magazine who was on a Travel Manitoba and Fly Fisherman Magazine-sponsored product development trip this September with Webber’s Lodges. Irwin was searching the wild untouched rivers of the southern Hudson Bay coast in Canada for brook trout.

What he found was nothing short of sensational.

“The fishing was superb,” said Irwin. “We would enter small pools and all three of us would have a fish on at the same time. The fish were so aggressive. And these were five to six pound trout. When you would bring one in, other 24-inch trout would attack it. They would attack your fish. They would attack each other. They were that hungry.”

Irwin was guided by some of the best in the outdoor business including fly-fisherman-guide Ryan Suffron, wilderness and fishing guide Stewart Webber, and Nanuk Polar Bear Lodge manager Nolan Booth. The group experienced early success in the rivers close to the Lodge and ventured further into the wilderness each day exploring new territory and more rivers.

Nobody really knew what they would find.

The owners of Nanuk Polar Bear Lodge had historical information on the area dating back 18 years, and a few of the native guides and their fathers before them had worked in the area for 30 plus years, but no one knew of anyone ever fishing the surrounding rivers and streams. The fishing was actually discovered by a few unassuming birders who decided to cast a spinner into a river within walking distance of the Lodge a few years prior.

“Ryan (Suffron) had been in there a few days earlier,” said Irwin. “He was an excellent guide and he found brook trout everywhere close to the Lodge. We wondered if it was a local phenomenon or whether all the rivers were totally stuffed with brook trout. And were they sea run brook trout? If so, they had the potential to get huge. The only way to ascertain that was to explore all the rivers.”

So the group ventured off on the quads, winching their way through willows and water and mud and sand and up over beaver dams, finding more fish as they went. They had to time their ventures just right, to get out before high tide. Being stranded in the heart of polar bear country at night was not an option.

“We spent our downtime walking within 60 feet of polar bears,” said Irwin. “Guide Andy Macpherson took us out to see them. They were all over the place. That’s stunning and amazing and that’s what a lot of people go up there to do. We didn’t see polar bears while we were fishing, but we could have.

“We saw moose, wolf and bear tracks while we were fishing. You could see the wolf tracks speed up and the moose tracks follow suit, so you knew what was happening. There’s nothing other than pure wilderness and the imprints in the mud tell the story of this wild place. It’s really pretty phenomenal. This is raw, unspoiled wilderness.”

The group didn’t really know if they could get to some of the rivers, and even if they got there, they weren’t sure if there would be any fish.

“Huge fish in great numbers,” said Irwin. “And indiscriminate feeders. They’ll eat anything. You can catch 30 a day. It’s unlike anywhere else in their native territory. The fishing was amazing. We were fishing in waters that no one had ever fished before.”

Brook trout have a native range from the Carolinas north to Manitoba and west as far as Nanuk, but their population has generally been destroyed everywhere. They’re being stalked back into southern rivers, but only six to eight-inch fish.

“These are 18 to 24-inch fish,” said Irwin. “They’re huge, native, trophy fish. They’ve never seen a fly. They’ve never seen a person. And when they see something that looks like food they eat it. The Manitoba Master Angler Program offers a Brook Trout Specialist Award for catching five brook trout over 20 inches in your lifetime. We probably caught five of those on the first day, not to mention smaller fish.”

The biggest fish of the trip came at high tide, but the native fish kept the group busy. There are very few places in the world where you can catch wild eastern brook trout, let alone trophy-sized fish that have never seen a fly, or a person, in uncharted, never-fished waters.

“We had incredible food and the accommodations were divine. The comfort was fantastic. It was almost surreal to go out on the quads, get all muddied up, fish a river that nobody had ever fished before, and return to caribou stuffed green peppers and a glass of wine. It was really something special.”

A new catch-and-release fishing trip limited to a maximum of eight fishermen is currently being developed by Webber’s Lodges for September 2017, and Irwin emphasized that this would be a trip of interest to fly fishermen looking for serious adventure. Watch for his full story in a spring/summer issue of Fly Fisherman Magazine. Trip details will be posted on this site before January 31, 2017. If you would like to be notified when the trip is posted, please send an email to info@webberslodges.com.

“You’re staying in an established Lodge with a proven track record of excellence,” said Irwin. “But this is a boots-on-the-ground walk-and-wade fishing trip. This is not riding in a Cadillac. You have to be prepared to ride quads and get dirty. The local guides are invaluable. They know the land, and that’s a must-have. But this is real fishing.” 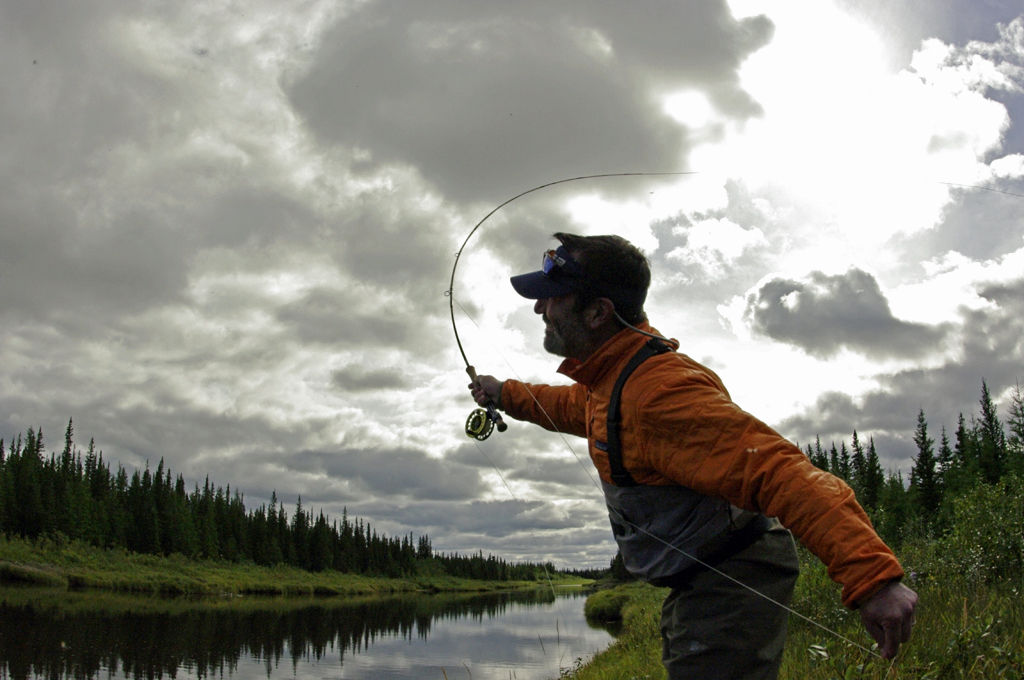 Unless one can enjoy himself fishing with the fly, even when his efforts are unrewarded, he loses much real pleasure. More than half the intense enjoyment of fly-fishing is derived from the beautiful surroundings, the satisfaction felt from being in the open air, the new lease of life secured thereby, and the many, many pleasant recollections of all one has seen, heard and done.
— Charles F. Orvis, 1886