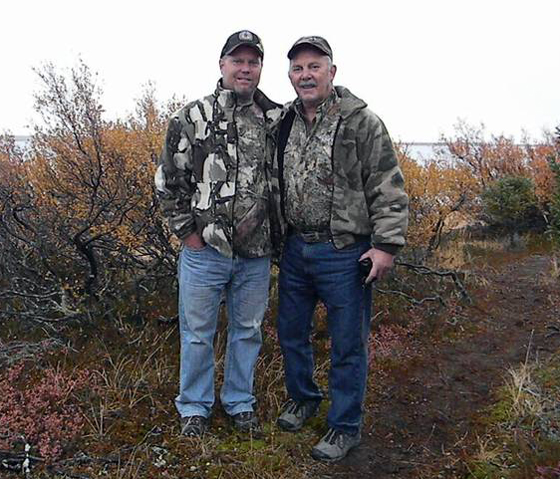 In late September of 2014, Merle Meszaros and his son Scott hunted barren ground caribou with Webber’s Lodges and Henik Lake Adventures. We thought they’d had a good hunt with us, but it had been awhile since we’d seen or heard from them. Until…

We found them in this hunting forum at Bowsite.com! And we’re glad we did! They had nothing but good to say about their caribou hunt with us!

Merle (Dad) goes by the name of BIGHORN on the Bowsite Hunting Forums and Scott’s handle is MatthewsMan. They too, were hoping their hunt would be memorable based on their early forum posts.

The father and son team flew by private charter from Thompson to Nejanilini Lake and then jumped on a Super Beaver for their final flight to the Caribou Camp at Baralzon Lake.

Merle got his first bull early and Scott got his on the second day of the trip.

“The Guide had to get the boat and tow him to shore,” said Scott. “Getting it out the velvet came off like crazy, so we pealed it all clean and then took the photos right on the shore.” 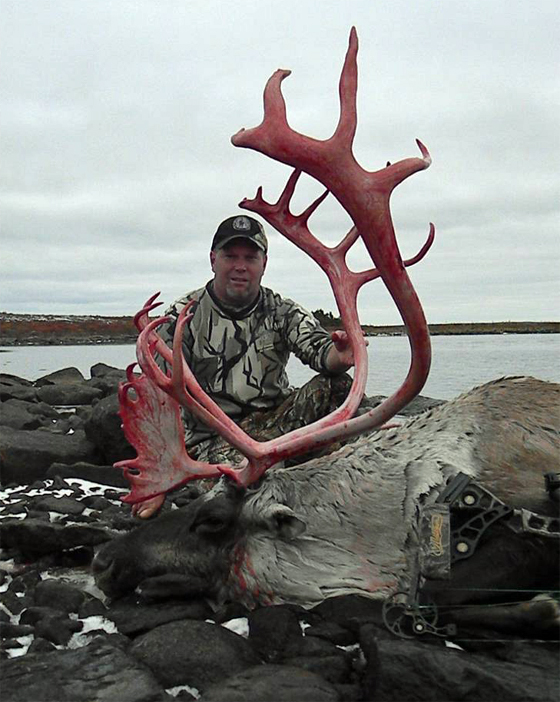 The weather on the trip was cold and windy with a few hours here and there of sunshine and warmth. There wasn’t a single bug all week, and the wind, water and waves also cooperated. 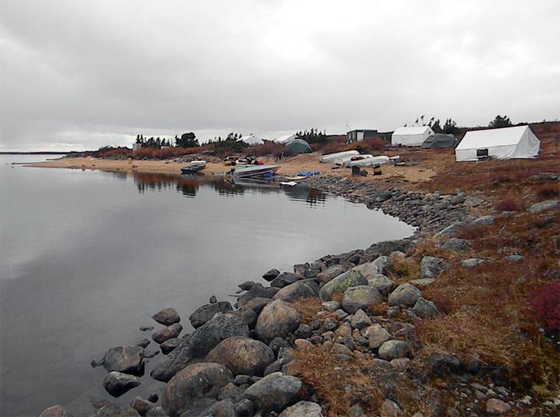 “My second bull I was hoping for a real monster,” said Scott. “Like some of the ones the rifle hunters in camp were putting on the ground, but the fourth day I went ahead and took this guy for a skull mount.” 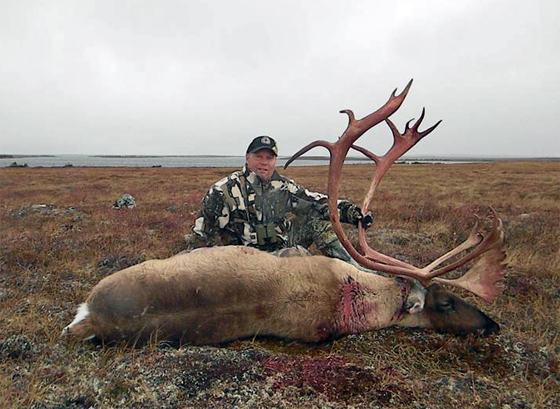 “The meals (our camp cook was Jody) were phenomenal,” said Scott. “And the guide we had (Jason) was really well versed on ecotourism due to his polar bear tourism stuff. Our Camp Manager Troy only got a few hours while hunters were out and shot this bull on the small island camp was located on. This was maybe 300 yards behind camp.” 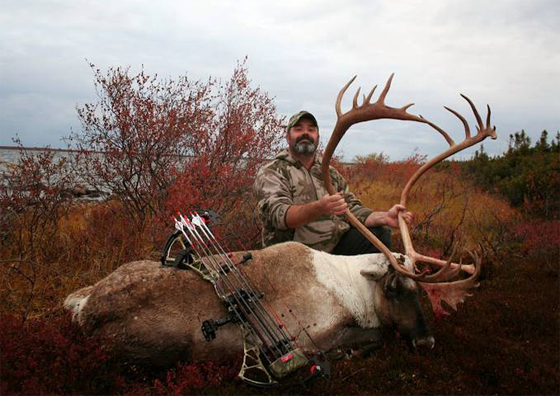 After harvesting out, Scott said there were some nice bulls that actually came by camp, even with six or seven guys standing in full view on a hill. In total 23 hunters harvested 46 bulls. Hunters at a highly reviewed competitor’s camp weren’t so lucky, with six of their eight hunters not even managing to sight a caribou. 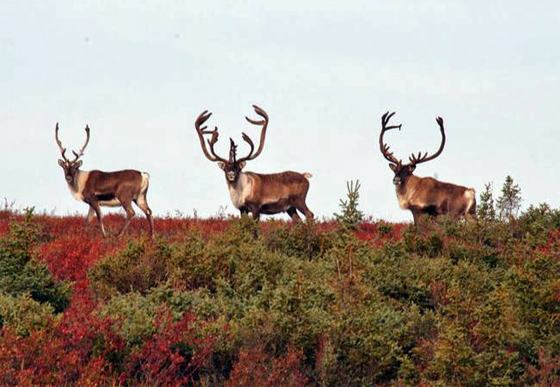 “When I shot my Shiras Moose last year Dad asked me what I still needed to get to finish the ‘Super Ten’ with archery,” said Scott. “And I told him I still needed a caribou. He sort of shockingly said, ‘That’s all you still need?'”

With the oldest of three children leaving for college last fall, Scott thought it might be as much as eight more years before he had chance to hunt caribou, but Merle wanted to see his son achieve his “Super Ten” milestone. Dad set up the hunt that made Scott’s dream goal become a reality.

“I feel very fortunate to have experienced this hunt with my Dad,” said Scott. “I am really thankful for all he and my mother have done for me in my life. I hope that someday I can do the same for my children. Our hunt was fantastic. It really was a trip of a lifetime for us.” 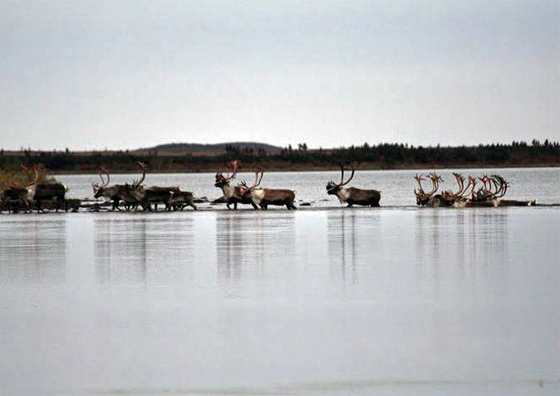 “Scott forgot to mention that our drinking water came straight out of the lake. It was some of the best water I have ever tasted.”

Merle also had a few tips to pass on in the forum.

He said to watch out for the Jodi, the cook, if you’re into cribbage. Jodi lost the first seven games in a row to him but she came back to take six straight. Breaking camp to go home probably saved Merle’s bacon. 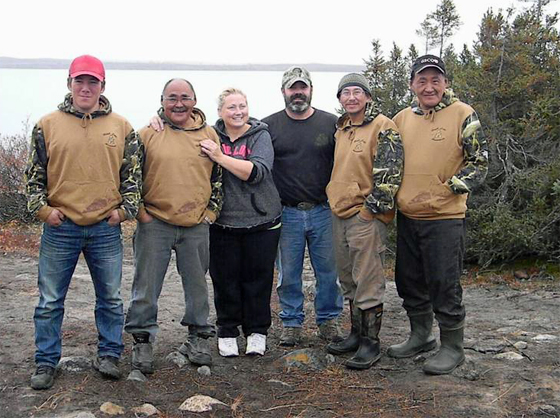 Merle was also happy to have purchased a new pair of LaCrosse 800 boots to take with him, and that WindShear clothing and a rain suit were a must to fend off the weather. He added that a spotting scope would just get in the way and that their 8 x 30 Swarovski Binoculars were okay but 10 x 42 would have worked better.

“I gave my range finder and a pair of GORE-TEX gloves that I had not yet worn to our guide,” said Merle. “I got a big smile and a hug from him so he obviously appreciated getting them. Here is a picture of our guide with my bull.” 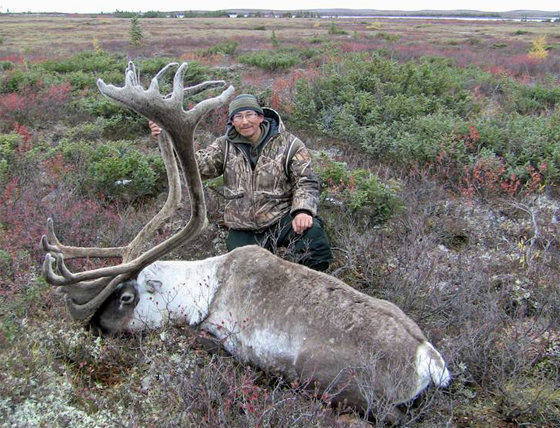 “My happiest times I have ever experienced are hunting with my son,” said Merle. “Bar none! I can’t imagine a hunt being better than this one.”

Merle will be 70 in a few months and he mentioned in the forum that his body was starting to give out on him. He’s hoping to harvest a couple of big bull elk this fall with his son.

“Because this may be our last hunt together,” said Merle.

It was an honor to host you and your son, Merle, on what may have been your final caribou hunt together. We’re so thankful you found us. 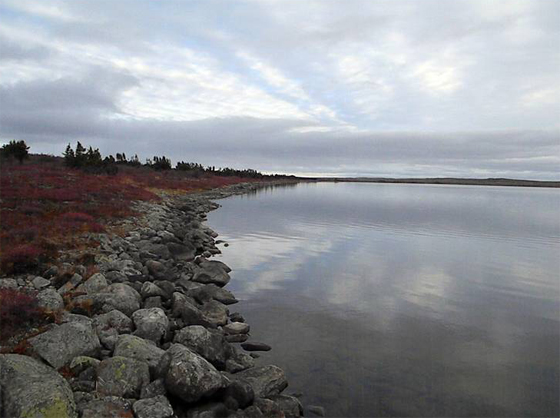