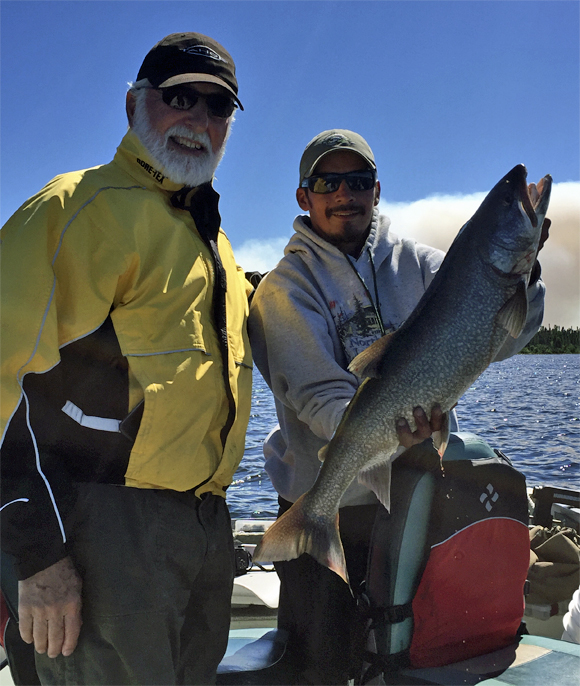 A fisherman, a philanthropist, an engineer, a company builder and a rocket scientist went fishing together at North Knife Lake Lodge earlier this summer. Guess who caught the most fish?

Sorry, that was a trick question. The 76-year-old Gadomski is actually all of the above, and he was at North Knife Lake Lodge for the third time this summer to continue a father/son tradition that began 68 years ago with his own father.

“Dad liked to fish for northern pike and bass,” said Gadomski. “I was mostly the oarsman. I would row him around the lake and he would cast. We would catch fish for the cabin, clean and fry them ourselves. We spent a lot of time together on sports and fishing. As I got older I preferred the action of fishing for bluegills and crappie. Now, I’m continuing the family tradition.”

Gadomski first came to North Knife Lake in the late 1980s with his father Chester, son Greg and his son-in-law Jay. He returned in 1995, and rekindled the fire again this year with stepsons Chris, Mark and Rusty Gilbreath, and Rusty’s son Ty. 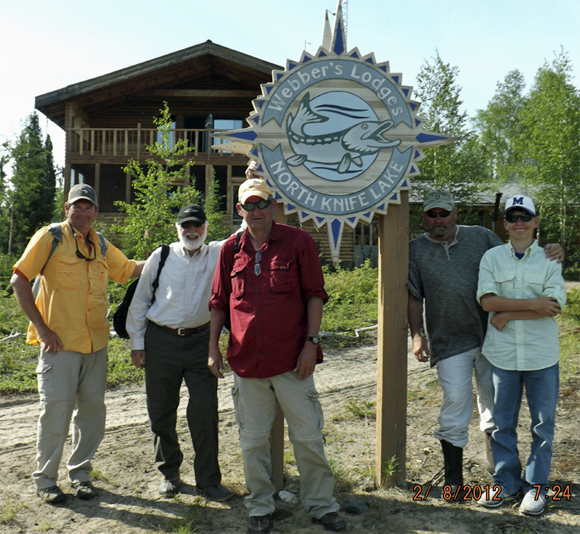 The group engaged in a family-friendly poker game in the evenings after heavy days of fishing, and Ty won the game on every night but one. On the family’s final evening at North Knife Lake, grandfather Gadomski defeated grandson Ty in a classic showdown.

Ty can take solace in the fact that he lost to a former rocket scientist and current philanthropist who has lived an amazing life loaded with unique experiences, accomplishments and a connection to the first man on the moon. 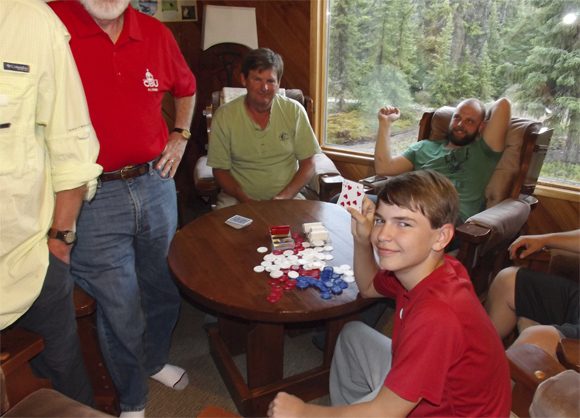 Poker champ Ty lost only once.

Early in his career Gadomski was a research and project engineer on the teams at North American Aviation and Brown Engineering that analyzed and designed Propellant Management Systems for the Saturn rocket.

It seems only appropriate that we’re posting this on the 47th anniversary of Neil Armstrong becoming the first person to walk on the moon on July 21, 1969. Armstrong flew to the moon with fellow astronauts Buzz Aldrin and Michael Collins on Apollo 11, which, was powered by a Saturn V rocket.

Then the real work began.

Gadomski then worked as a project engineer/manager at BASF Corporation in Ludwigshafen, Germany and Parsippany, NJ on various major projects for the production of plastics, dyestuffs, pigments, and intermediate chemicals including additions to existing facilities and large grass roots plants.

In 1974, using every ounce of his practical experience, Gadomski founded and became CEO of the PSI Group of Companies in Memphis, Tennessee.

Deeply involved in engineering, fabricating, construction management, and general contracting from 1974 to 2001, the PSI Group established a worldwide reputation in the processing of grains, oilseeds and sugars, into higher value added products such as corn starches, corn sweeteners, edible oils, cane and beet sugars, ethanol and biodiesel.

In 1998 Gadomski sold his highly-awarded company, which was the largest engineering and construction company in Memphis, to Lurgi, the second largest General Contractor in Europe. He retired in 2001 after doing leadership transition and having company annual sales in excess of $100 Million.

“I’m just an inner city kid from Chicago,” said Gadomski. “I was brought up in a loving and caring environment by blue collar parents, Chester and Adeline, who were first generation children of Polish and Italian immigrants who were devoutly Catholic. Every day they showed me and my brother that they valued hard work, integrity, unconditional love, family, and a good education for their children. My brother and I have followed in the tradition they set for us.”

Gadomski has never forgotten his early influences, and has always given back to the communities and the people who have helped him achieve success. Among his numerous charitable endeavors, he spent more than 20 years as board member and former chairman of Christian Brothers University and five years as their Alumni Fund Chairman while also supporting the Memphis and Shelby County United Way and coaching youth soccer.

Currently co-chairing Faith in Progress: The Campaign for Advancing Education, a $70 Million Capital and Endowment Campaign for Christian Brothers University and the Memphis community, Gadomski also has variety of philanthropic involvements supported by the Gadomski Family Foundation donor advised fund at the Community Foundation of Greater Memphis, and he is a Society of Entrepreneurs Mentor for their Insights Program, helping local entrepreneurs develop their businesses.

Gadomski’s incredible business accomplishments and philanthropic endeavors were sadly balanced by personal tragedy. Only six weeks after selling his company he found out that Dolores, his wife of 37 years, had breast cancer. Dolores passed away in 2000. Gadomski also lost his son Greg to cancer in 2003.

“Christian Brothers University and my first wife changed my life forever,” said Gadomski. “They educated me and she made me get serious about life. I was blessed with a loving wife and two great kids.”

“I had been married for 37 years, and Dolores was the leader of our family,” said Gadomski in the spring 2009 edition of the Christian Brothers Magazine belltower, in an article entitle entitled It’s Not Rocket Science (pages 31-39). “I took care of PSI, and she took care of everything else. I was lost.”

Devastated, Gadomski kept himself busy with his philanthropic work, until a chance meeting and a blind date that almost didn’t happen brought him together with Florence “Flo” Smith, the favourite aunt of his longtime executive assistant Vickie Hall.

Flo planned to cancel the date, but Vickie wouldn’t let her, and even had her mother follow her aunt into town to make sure she kept her brunch date with Gadomski.

“When I looked down the long corridor, I saw this lady dressed in a black dress and a string of pearls, as she said she’d be dressed,” said Gadomski in the aforementioned article. “She had this beautiful smile, and I said to myself, ‘Boy, I sure hope that’s her.’ And it was Flo.”

They were married two years later.

“God provides,” said Gadomski. “I met my current wife Flo after she had been single for almost 20 years, and inherited her three boys, whom you have met, and they have become my sons. We have blended our families together and it consists of 19 when everyone shows up.”

Flo’s three sons, Chris (54), Mark (53) and Rusty (50) Gilbreath, shared Gadomski’s love of fishing, and the group was soon on the water together in Florida, Alaska and Canada.

“We grew up with Mom,” said Rusty. “Dad wasn’t around much. Dick’s secretary knew our Mom, suggested a date, and it was on from there. You could not ask for a better person. He helped Mark and Chris and I go into business. And he has this ability to talk to people and make everything alright, especially with children. He’ll sit down and discuss problems with them and the next thing you know they’ll get up and everything’s all fixed. He’s a remarkable man.” 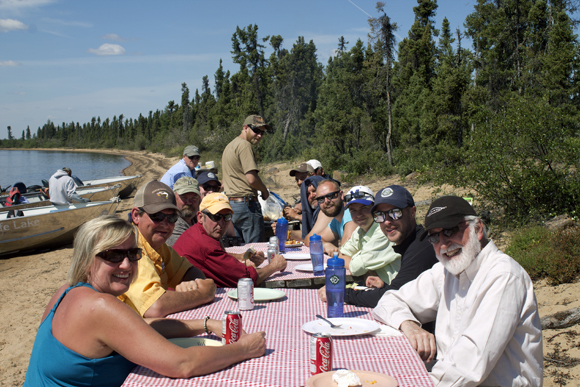 Gadomski had already been fly fishing in Alaska, Florida and Costa Rica, and had fished at Wollaston Lake in Saskatchewan, as well God’s Lake, Big Sand Lake and North Knife Lake in Manitoba with his father and son, before meeting his new stepsons. He’d also been involved in a partnership that owned Snowbird Lake Lodge in Canada’s Northwest Territories.

“Ten of us owned it for about five years,” said Gadomski. “Cisco was the natural feed in the lake and there would be feeding frenzies after the ice broke up. The seagulls and Arctic terns would be flying above and the trout would come to the surface. We were catching them on surface lures.

“My responsibility was to interface with the guides and help them focus on the customer experience, to help the guides learn more about the lake so they could create the best fishing trip possible for the guests. We could only have up to 25 people at a time at the lodge, as we were limited by the facilities we had.” 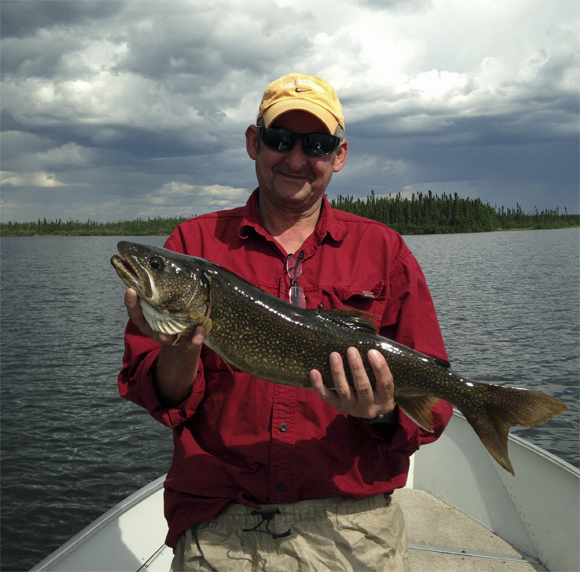 “The last time I was at North Knife with my son he caught six Master Angler Lake Trout on a nine-inch Canadian Wiggler,” said Gadomski. “And this time the boys thoroughly enjoyed the trip, the camaraderie, and the food. No matter what the chef prepared it was delicious. It was great experience. Everything was terrific.”

Gadomski and sons have now fished at a few of Manitoba’s finest fishing lodges as well as in the Florida Keys for tarpon and shark and in Alaska for salmon, among other places. 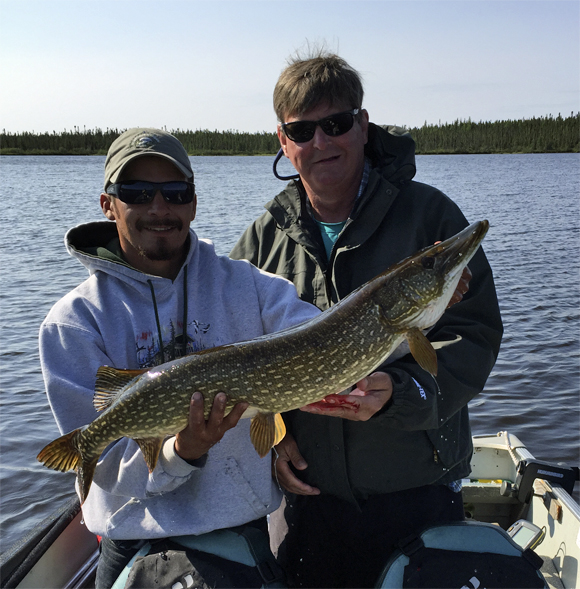 “We caught six different species of salmon in Alaska,” said Gadomski. “And the grizzly bears were fishing in the river next to us.”

“Alaska was beautiful and we caught a lot of fish,” added Rusty. “But the bugs were really bad and it got to the point we’re I’d be hoping for rain just to keep the bugs down.”

And it was never just about the fishing. The family also shares a common love for the beauty of nature according to Rusty, the comedian of the family who also took the brunt of the jokes while showing off his Master Angler hat at the dinner table at North Knife. Rusty loved the fishing action at North Knife Lake, but also said he once spent a few amazing but fishless days fly-fishing an area in Colorado that reminded him of the movie A River Runs Through It.

“I never caught a fish,” said Rusty. “But it was beautiful. And I do kind of look like Brad Pitt. That’s what you were thinking right?” 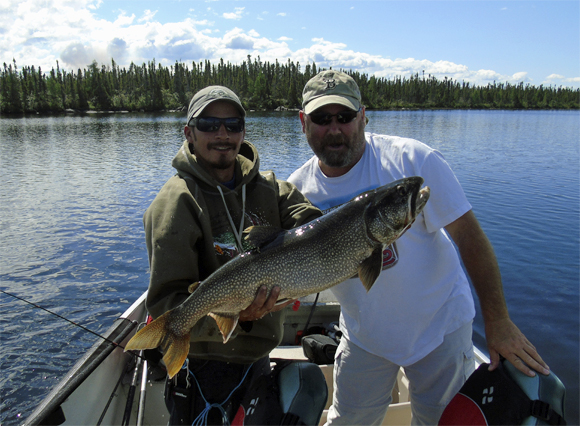 All kidding aside, the boys from Memphis were already researching their next family fishing trip. There was talk of fishing in the Amazon and of going after the world’s hardest hitting fish, the Golden Dorado in Patagonia in South America. Going back to Florida to fish for Tarpon was also mentioned, but action-filled northern pike fishing in Canada would always be on the list.

“You can only catch so many Tarpon,” said Rusty. “They’re great fighters, but it takes you forever to get them close to the boat. And then they take off again and run out another 100 yards. After catching a couple you’re done. Northern pike are just fun. Ty loved it and I loved it, especially the shore lunches.”

“The boys and I have decided to take our next trip to Alaska,” said Gadomski, who appeared chipper and ready for action while at North Knife Lake, but who has also had his share of sports injuries over the years. “I’m pretty healthy right now. I exercise daily. The Lord has blessed me. We had a fabulous experience with everyone at the Lodge and out on North Knife Lake.