What an odd year! Normally when I do a season wrap-up there are several paragraphs going into detail on all the adversity we faced and how we overcame. Constant change is something you get accustomed to when operating in the far North, with limited access to almost everything.

Due to a couple of late cancellations on this year’s spring Musk Ox hunt, we ran a lighter group this year, with five hunters joining us over two weeks. Week one consisted of three hunters, two hunting buddies, Jon Baker and Ward Poppenberg, and single hunter Logan Elliott.

Travel day was uneventful as the weather held and flights ran on time. Everyone settled into their hotel rooms and sorted their gear before we headed over to the wildlife office for licenses and tags. After that, we gathered in the restaurant for dinner early in the evening. With playoff hockey to entertain us, we spent the evening in the lounge relaxing on the sofas watching the game on the big screen TV… and yes, this was a Musk Ox hunt we were on!!

Hunting Day one began with a hot breakfast in the hotel restaurant. We jumped on our snow machines and hit our first (and only) hiccup — one of the snow machines would not run. I volunteered to stay behind, but the hunters and guides figured I could ride in the komatik for the day. If you have never spent a day on one of these, count yourself lucky. It is an utter and complete physical beating, and I am not sure that accurately describes my adventure, but that’s another story. 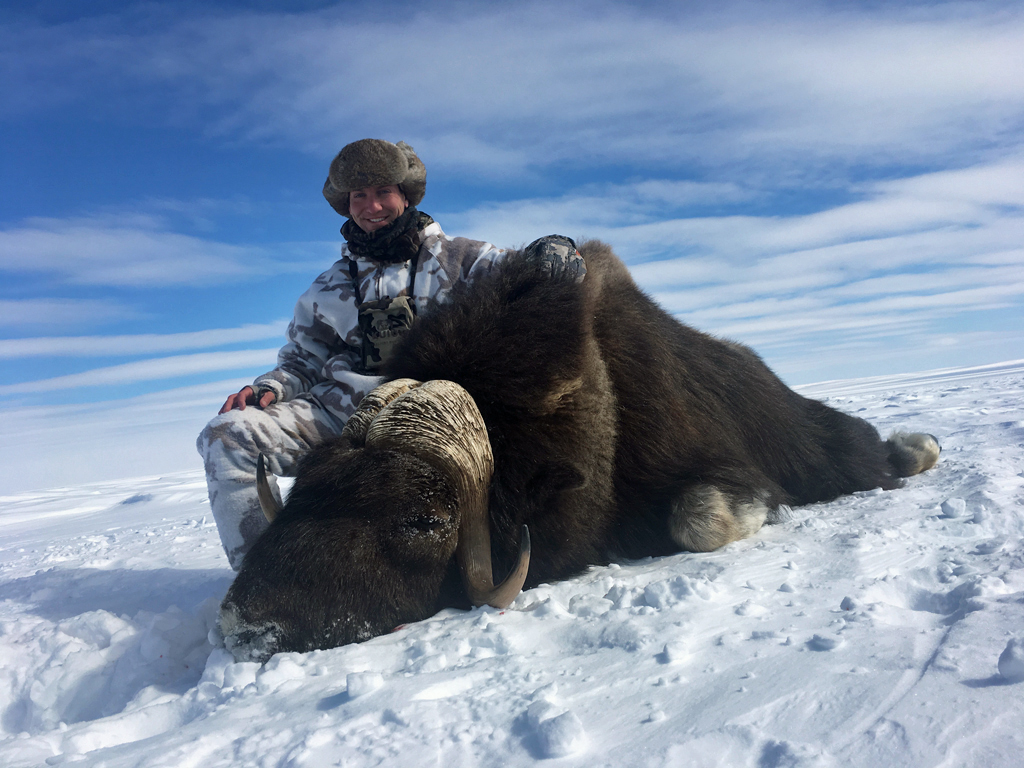 Logan Elliott with our first Musk Ox of 2017.

It was a great weather day and late in the morning we started seeing two separate groups of Musk Ox. It was close to lunchtime so we decided to grab a bite before investigating the herds. After a quick lunch, it was decided Logan would have first chance. The herd had a few great bulls in it, and with the bulls reading the script, Logan became our first successful Musk Ox hunter for 2017. The rest of the group came to congratulate him and after a few pics, the guides got to work.

While prepping Logan’s bull, we noticed the other group of Musk Ox was in a prime location for a stalk. Ward, Jon and their guides maneuvered nearer to the bulls to investigate. With a small hill in the perfect position, the hunters and guides stalked in range and found that the group contained several massive bulls! Our hunters confirmed which bulls each were going to take, and after both rifles fired we had tagged out our first week of hunters.

After we had cleaned up Logan’s bull, we headed over to see what happened. We arrived on scene and saw two great bulls, one with slightly more mass and the other with slightly more length. Three bulls for three hunters in one day made for a late arrival back at camp, but with the hunt completed, no one was disappointed. A quick meal, a little hockey and everyone headed off to their rooms for a well deserved rest.

The next day, everyone spent a little down time in town, and we collected our Nunavut Export Permits. Later, with a little help from our main office, flights were rescheduled so our hunters could get home earlier than expected.

The weather remained perfect for the rest of the week and into the next. Our second group of hunters arrived on time and we followed the same first-day schedule as normal – settle in, unpack, get licensed, eat and watch hockey!

Hunting Day one for group two dawned clear and cool. With only two hunters in camp, Bill Murphy and Clay Evans, there were enough machines to keep me from riding in the komatik — great news as I had hardly recovered from the previous week’s adventure. 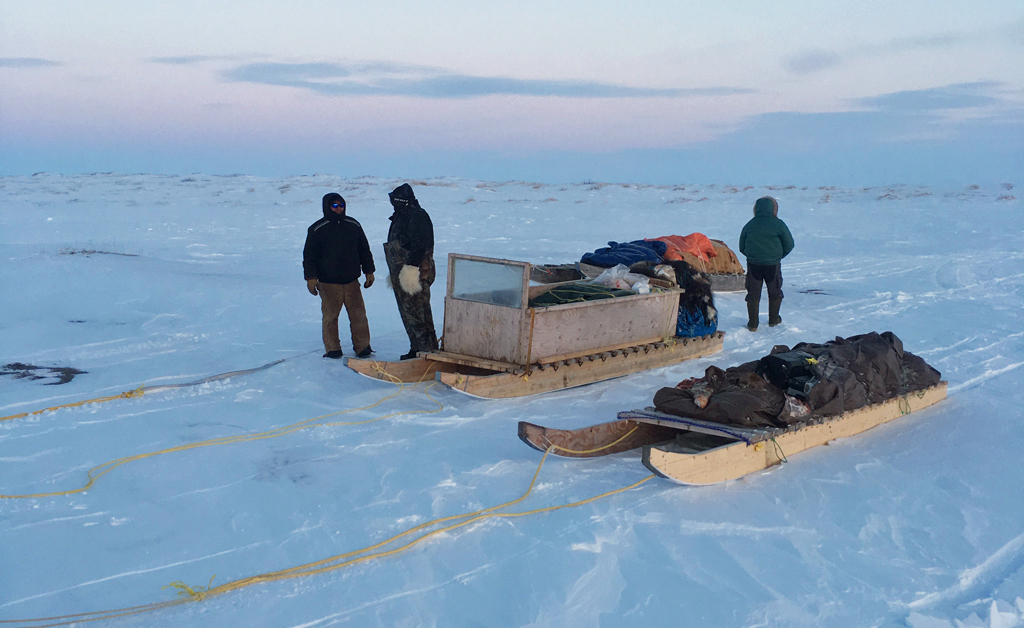 Russ takes a break from his “fun” komatik ride.

We decided to hunt in a different area than normal, but found Musk Ox before lunch — a large group of over 40 animals! Again, we decided to have lunch first and evaluate the herd later. When we got closer to the animals, we realized there were several quality bulls in the group and devised a game plan.

Clay was going to be bow hunting (we had not taken any bowhunters to this point as we were still looking at how it could be done with consistent success) and he knew what he was getting into. We decided Clay would have the first opportunity, and with a large group of Musk Ox we knew the herd would fragment when a shot was taken or a blown stalk occurred. With that in mind, we set Bill up on a likely escape route.

As it turned out, Clay was an incredibly skilled and accomplished bowhunter. This combined with his athleticism and accurate shooting led to Clay taking our first-ever archery Musk Ox!  Clay made a near perfect, double-lung shot from 52 yards and his bull was down in short order.

As expected, the herd split and Bill was in position to take a great bull. I won’t reveal his age, but I can tell you that he is now officially our oldest Musk Ox hunter. Everyone in camp was very impressed with his perseverance in dealing with the conditions, and with his ability to navigate a snow machine in the rough terrain we encountered in the new area. 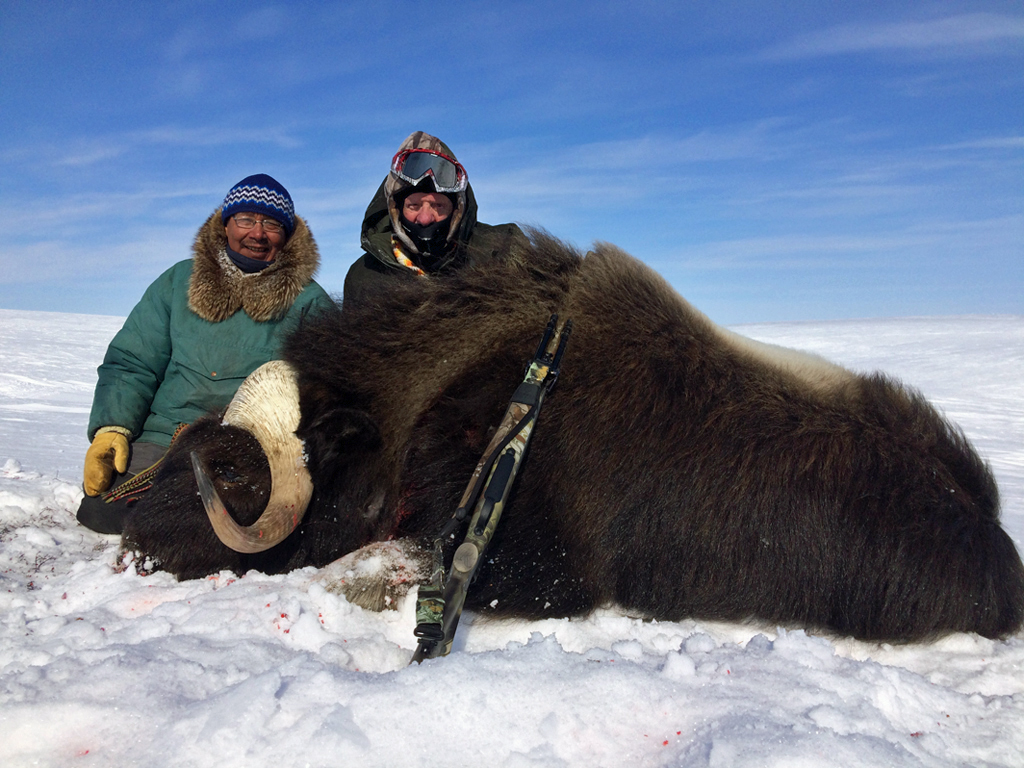 Bill Murphy proves that age is no barrier when it comes to Musk Ox hunting!

So once again we were fortunate enough to be tagged out on our first day. As on the first Musk Ox hunt, the morning after was used to obtain the required permits, and travel arrangements were adjusted. Things very seldom go this smoothly, so we’ll take it when we can get it. Hunters, guides, and even yours truly made it home early. I’ll have to remember this when things don’t go quite this well next year!

At this time, we have not officially measured any of the bulls, but according to camp scores, we will exceed our average of 70% on bulls scoring over the Boone & Crockett minimum. We will provide updates on those numbers once we have them.

A big thanks and congratulations to all our successful spring Musk Ox hunters!