Trophy hunters, fast-action fishermen, families, couples and corporate groups all have their different reasons for returning to North Knife Lake Lodge, but there are certainly common threads among them.

For starters, they’re all real people, just like you. And all have a taste for something just a little bit special — that out-of-the-ordinary experience that comes with getting back to nature and away from daily stressors, mass production, technology, cell phones and crowds. Internet is available at the Lodge, but most prefer not to use it.

Less than 50 people per year fish the 240 square kilometers of North Knife Lake and its pure, crisp Canadian waters, filled with hungry Lake Trout and Northern Pike. You don’t have to fly-out from the main lodge to catch a trophy here, and you certainly won’t wait long for that first fish. The action is always fast. 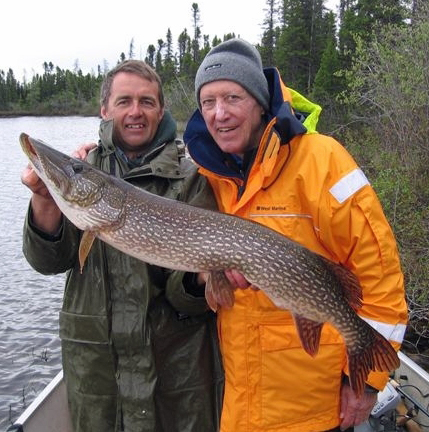 Gene Vukelic (right) has been returning to North Knife Lake Lodge with his family for 20 years.

“We’ve got good fishing around Buffalo and we have a place in Parry Sound on Georgian Bay where we fish for northern pike, but the big difference between fishing here and fishing at North Knife Lake is the natural environment, the outdoors.

“And we can catch between 150-200 fish per day. Sometimes they’ll strike as soon as the lure hits the water. Other times we’ll be reeling in a smaller fish and a big pike will grab it. We use barbless hooks and the guides are very careful with the fish. It’s all catch and release.”

Like Gene Vukelic, and for almost as long, Rich Knaebel of Mid-Am Building Supply has been combining family fishing trips and corporate fishing trips to North Knife Lake Lodge for the past 15 years, although they also like to fly out from the main lodge to Small Lake. 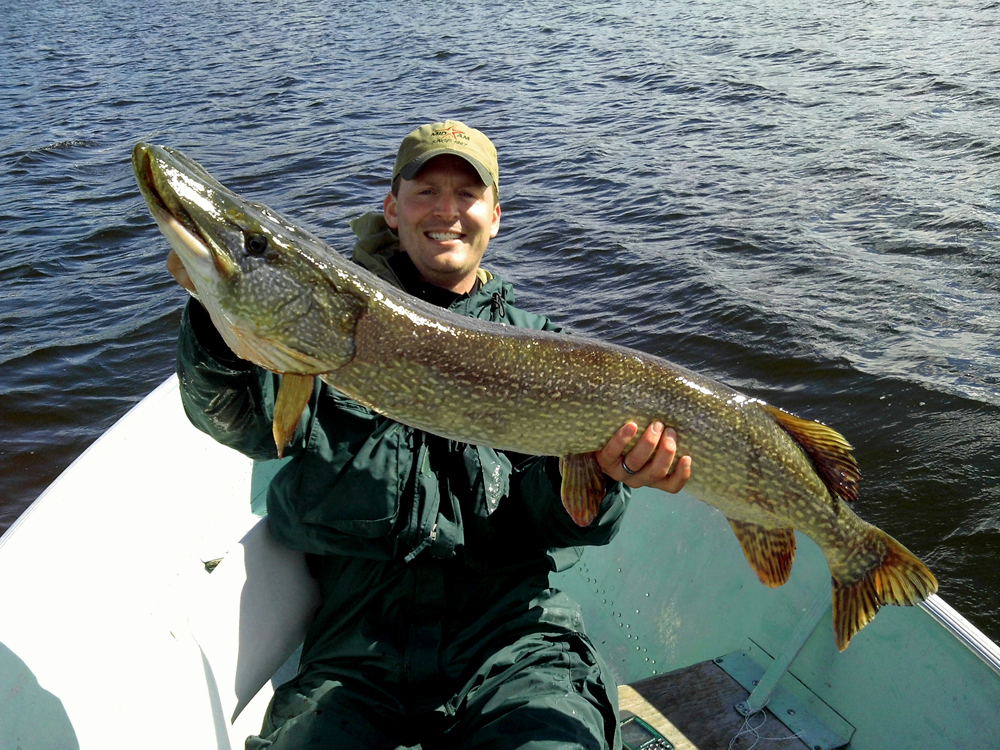 “The business people we’ve taken have been thrilled,” said Rich. “We really look to find people who appreciate what an adventure it is. It’s a once in a lifetime adventure. There’s been a time or two when we’ve had clients want to try something different. One of our clients, who had been to North Knife Lake Lodge and on our fly-out trips to Small Lake, wanted to go to Great Slave Lake, but when he got back he said, ‘You know, it just wasn’t the same as when you took me to Webber’s.’

“Doug and Helen (Webber) and Mike and their families want to make it personal. And they want you to have a good time. They really sit down and talk to you there, genuinely really nice people. They treat us well. It’s hard to explain until you’ve tried a few other lodges. Webber’s sets a pretty high mark. They’re the kind of people you want to come home for supper with you.”

Philanthropist, company builder and former rocket scientist Dick Gadomski first started fishing at North Knife Lake in the late 1980s with his father Chester, son Greg and his son-in-law Jay. He returned in 1995, and rekindled the fire again in 2016 with stepsons Chris, Mark and Rusty Gilbreath, and Rusty’s son Ty.

“Dad liked to fish for northern pike and bass,” said Dick. “I was mostly the oarsman. I would row him around the lake and he would cast. We would catch fish for the cabin, clean and fry them ourselves. We spent a lot of time together on sports and fishing. As I got older I preferred the action of fishing for bluegills and crappie. Now, I’m continuing the family tradition.

“The last time I was at North Knife with my son he caught six Master Angler Lake Trout on a nine-inch Canadian Wiggler. And this time the boys thoroughly enjoyed the trip, the camaraderie, and the food. No matter what the chef prepared it was delicious. It was great experience. Everything was terrific.”

The meals at the Lodge are based on the Blueberries & Polar Bears cookbooks created by Webber’s Lodges matriarch Helen Webber and her partner Marie Woolsey. Over 100,000 of the cookbooks in the series have now been sold, and many of the other fishing lodges in the industry use them!

Fond family memories are created at North Knife Lake Lodge, and couples fishing trips allow partners to reconnect in a superbly stress-free atmosphere only nature could create. But it’s not just the fast-action fishing, great company and a chance at a trophy northern pike or lake trout, there’s also always a chance of spotting black bears, moose, wolves and eagles.

Add in a swim in the crisp, clear, rejuvenating waters of North Knife Lake on a hot day followed by a few romantic sunsets, and you have the makings of a perfect marriage.

As long as you know who’s supposed to catch the most fish.