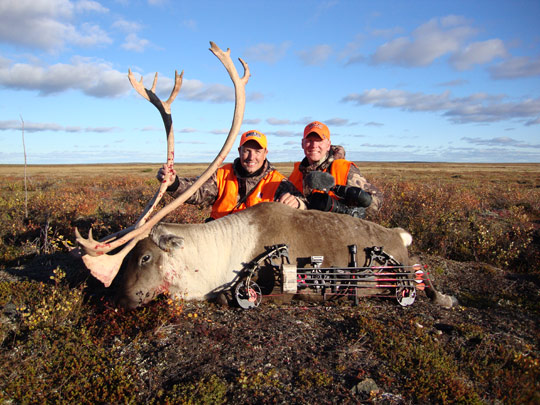 Dave and I are extremely fortunate in that we get to hunt all over the globe. That being, said every once in a while the stars align and you end up with the perfect ingredients for a world class hunting adventure.

You must have great guides, accommodations, meals, other hunters in camp, weather, and lots of quality animals to chase. Well, Dave and I were lucky to be guests of Webber’s Lodges and our hunt with them was one of the best we have ever experienced!

The hunt began when Dave and I met up in Minneapolis and then flew to Winnipeg. From Winnipeg we flew to Churchill, Manitoba the “Polar Bear Capital of the World”. Along the way we met up with some of the other hunters that we were going to be hunting with all week and we could tell right away we were in for a great time.

From Churchill we loaded the float plane and flew approximately 1.5 hours to Schmok Lake, where we met up with Kent Michie Camp Manager. Kent was a great resource for us while we were preparing for this hunt and we were in constant communication, so I was anxious to finally meet him when we landed. Kent’s knowledge of the area we would be hunting in was impressive and we found out during over the course of the hunt that his cooking was not bad either!  Let me just say that is was abundantly clear that Webber’s Lodges takes care of their hunters from A-Z!

After a brief meet and greet we organized our gear and headed out to the tundra to see if we could spot some big caribou bulls. We could tell right from the start that our guide Tim and his son Joseph were up to the task and we knew we were in good hands.

We probably saw 100 caribou the first day and day two brought several hundred more caribou. The tundra was literally ablaze with color. The blueberries were ripe and it was tough not stop to eat a few of the great tasting berries at every good berry patch we passed by.

The food in camp was outstanding and for the first couple of the days the weather was almost too nice, if that is possible. Finally on the afternoon of day two, I was able to harvest a great P&Y class caribou. I was super pumped to harvest my first ever central barren ground caribou.

The next morning brought one of those hunting experiences I will never forget! We were set up on a high point glassing for big bulls with our trusty Nikon binoculars when we spotted an absolute giant. It was one of those bulls that you know immediately is a shooter. We took off down the hill toward the giant and in no time flat we had closed the distance to less than 250 yards. The big boy must have read the script as he worked closer to our ambush spot along a sparse tree line.

Finally my Nikon range finder said he was at 50 yards and it was now or never so I released my Bow Madness arrow from my PSE Dream Season Evo. I hit the bull a little back but he was quartering away and the Rage 2 Blade Xtreme did its work and he went down within 30 yards. Wow what a hunt and what a bull! He only seemed to grow as I got closer. No ground shrinkage for this one! I hugged super guide Tim so hard I accidentally knocked him down. I was so pumped up and now Dave was up to bat.

The next couple of days brought some nasty weather with strong winds and rain. Our Scent Blocker Downpour gear kept us dry and Dave had some close calls, but we could not close the deal. When the weather finally broke we were already perched from our lookout spot and Dave spotted a good bull as far as he could possibly see with his Nikons.

An hour later, after covering a half mile or so, we were within 100 yards of the bull. Dave and I used the cover we had available to get to within 40 yards. Dave checked the distance at 33 yards with his Nikon range finder and prepared for the shot. When he released his Rage tipped Bow Madness arrow from his PSE Dream Season Evo I knew the bull would not make it far. Amongst all of the excitement Dave looked up and saw two arctic wolves approaching our location. The pair was almost pure white. What an experience to witness those wolves trailing the herd and ending up within a couple hundred yards of Dave’s downed bull.

We hunted the last morning and had another close call, but the bulls stayed just out of range. Overall it was an amazing northern adventure and a huge thank you goes out to Webber’s Lodges, Kent, Tim, and Joseph for helping me to fulfill a lifelong dream of harvesting a Pope and Young Caribou with my bow.

Dave and I saw hundreds of caribou and made lifelong friends in the process. Everyone in our group was able to take at least one caribou and the rifle hunters were 100 percent successful on great bulls!  We can’t wait to go back and do it all over again. 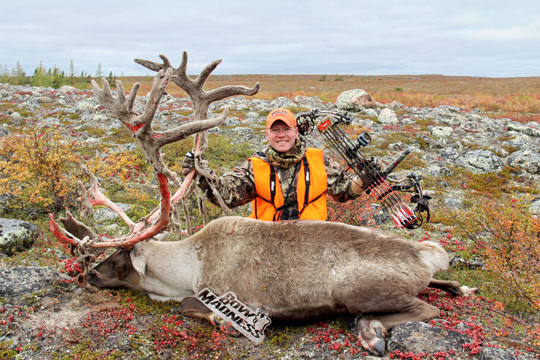