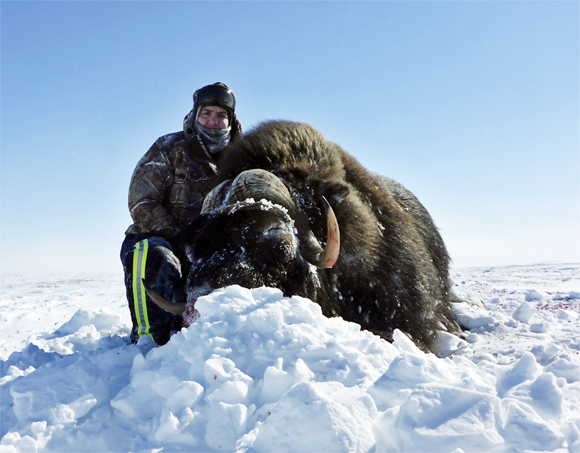 We went into the ring with Mother Nature for our first spring musk ox hunt of 2016 in Baker Lake, Nunavut and won by a knockout.

All four were successful in taking potential Boone and Crockett calibre bulls in the 105-114 range, but you just never know what Mother Nature is going to throw at you in the far north, and she had a few haymakers for us in the first four days of our hunt, which was scheduled to run from April 18-24.

After a 4-legged flight from Winnipeg to Churchill to Chesterfield Inlet to Baker Lake, we all checked into the Nunamiut Lodge Hotel in Baker Lake. It was 13˚ F and we took the snowmobiles out for test drives and sighted our rifles. Ready for action!

Then came the wind, snow and zero visibility. 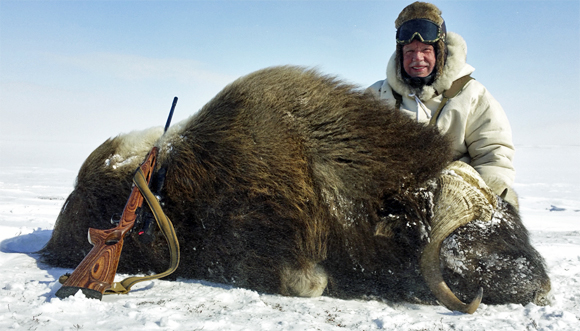 On Day 2 the temperature was normal at 13˚ F but gusting winds of up to 42 mph left us with less than 500 metres of visibility. We made a visit to the local museum, took a few short trips in town and hoped for better the next day. The wind continued to gust on Day 3 and temperatures dropped to -13˚ F. This time we spent most of the time in the hotel, hanging out in the lounge and watching TV.

“If I had to compare the snow at Baker Lake to rainy days somewhere else, I’d rather be up there,” said Peterson. “The accommodations were very comfortable, and of course the TV doesn’t hurt anything. I did bring three skinny paperback books with me, and I went through those rather quickly. It wasn’t bad at all. The people and the food up there were absolutely tremendous. I think everybody gained weight.”

“We were treated very well,” said Short. “I felt that Russ was very motivated and really paid attention to everyone. All four of us were kind of likeminded, it was just way too cold to go out, so we were grateful to be inside. If you wanted to get dressed, if you wanted to go through the rigmarole of getting dressed, you could walk up and down the main street there just to get exercise if you really wanted too.”

On Day 4 we were hopeful and decided to venture out on the snowmobiles despite the continuing high winds and low temperatures, but we were back at the hotel an hour later due to lack of visibility. Day 5 featured even higher winds and lower temperatures with a visibility of less than 300 metres.

“The lodge was very comfortable and the food was very good,” said Short. “And we had entertainment and books to read. But we did get a little antsy, especially on the third and fourth day when you’re sitting there, starting to think we’re running out of days, but the whole thing just kind of worked out. 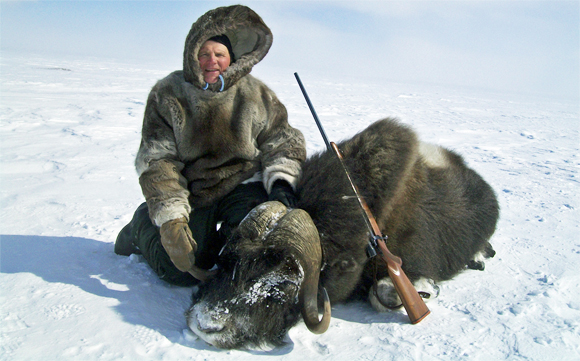 “It was kind of a blessing, because we got to sit there with the native guides and they told us what their lifestyle was like. I knew a little bit about them, but to talk to the guys who really live it, about hunting the musk ox and where they find them… and then when we finally went out and found them… I feel like I got the whole experience. You feel like you’re one of them. Their whole life revolves around the snow machine and the animals that they hunt. It’s ordinary to them. They know we come from far and wide to shoot musk ox, but to them it’s just another day.

“They had interesting stories about hunting whales and the polar bears, things that we’re not allowed to participate in, but they hunt those pretty regularly. And there’s a lot of difference in their diet, it’s so different than what we eat. They eat the beluga whale blubber, caribou tongues…”

On Day 6 temperatures ranged from -10˚ F to -15˚ F but we were rewarded with almost a mile of visibility between wind gusts and the hunt was on!

We located two good bulls early but went by them in search of a larger group. We soon found a group of 8-10 that had been only half a mile away. We hadn’t seen earlier them due to the poor visibility but we had them in our sights now. There were several good bulls in the bunch and Weston Millward took the first one. Shortly afterwards, Suzanne Short took another great bull from the same group.

Terry Fowler and Dale Peterson traveled back with their guides to the first two bulls we had seen, and after a short stalk both took their shots to complete a perfect 4-for-4 day.

“It was a lot of work in one day,” said Peterson. “But with four hunters and four guides it worked pretty good. We all got our musk ox on the same day.”

“I know that’s the way Russ had it planned,” he laughed. 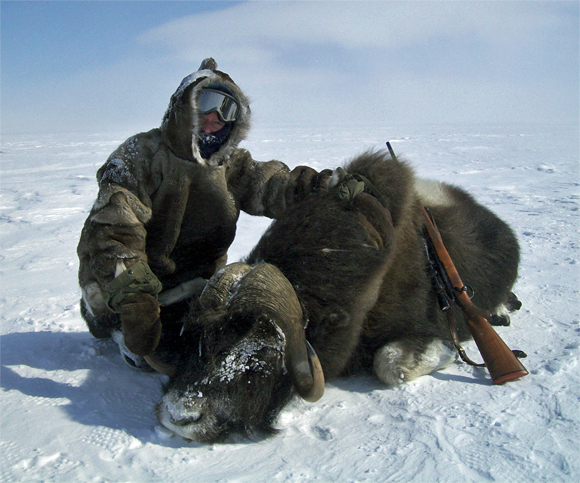 “I was pretty confident that even if we had one day that we’d still get our musk ox,” said Short “That’s what the guides were telling us. And from what I understood and from watching videos, you just need one good day. It’s kind of a guarantee that you’re going to get one.”

“Great hunter attitudes saved the hunt,” said Mehling. “Having a comfortable place to wait out the weather was a bonus. All animals were potential Boone and Crockett contenders. The area has a great population and incredible ‘big bull’ genetics, so even on a “one day” hunt, hunters didn’t have to ‘settle’ for just an average bull.

This was the first musk ox hunt for Suzanne Short, who is part of a growing population of female hunters, and she’s already planned her next hunt. She’ll be heading home to Texas to hunt Barbary Sheep, also known as Aoudad, around Christmas time.

“I didn’t get into hunting until I was an adult,” said Short. “I’m only 33 right now, and right after college I moved from Texas to Alaska. I knew some people that got me into it, and some family. I was working with the people that invited me, and I got more and more into it, so I got my own gun. From there, I just started doing different things. I really like it because of the opportunity to travel, the adventure part of it. You just never know what’s going to happen.

“I know some women who hunt that are very driven. Some of them do things differently than I like to do. Some of them just like to go for the meat. Some of them are into it for the physical activity like climbing mountains. And others do it just to see a new place, new animals. There are so many different objectives.

“I know some other female hunters. We go out from time to time. I’d like to see more women involved in it. I think it’s an untapped market really. I’ve never been included in the market, never been treated seriously as a hunter.”

You have now, Suzanne.