A warm cooking letter to Webber’s Lodges, from a far away country 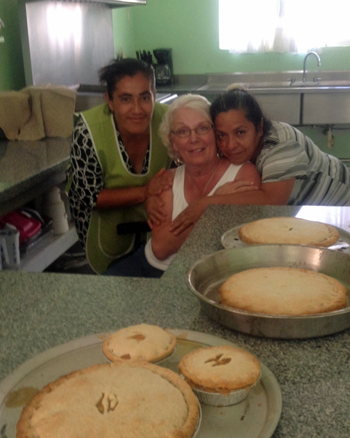 You just know you’re doing something right when you get letters like the one below from Diane Edgeworth.

Diane bought one of our Webber’s Lodges Cookbooks from the Blueberries & Polar Bears Cookbook Series, and used it to help a charity in Mexico!

Several years ago I purchased your Blueberries & Polar Bears cookbook. It is my very favorite as well as my daughter’s, so it is well traveled between her house and mine. My husband and I spend several months in Bucerias, Mexico. We have become involved with the Manos de Amor Orphanage here and help with the bake sale part of a big fundraiser they have each year in February. We bake an enormous amount of stuff for five days before the event.

This year we included cherry and apple pies and butter tarts in the lineup, and I used my tried and true pastry recipe from your book. I wanted you to know that many, many people said it was the best pastry they had ever had.

This afternoon I am going to the orphanage to teach the ladies that work there how to make pastry and pies. They really want to learn this, as it is something they have never done. Last year we made carrot cake together, a huge success.

Thanks again for making my baking skills look so good!

Thanks so much for this letter Diane. Such a wonderful story! We’re so happy to hear that you are enjoying one of our cookbooks and putting the recipes to work for a good cause. We wish you the very best in your charitable endeavors and we are including a link to the pastry recipe you wrote about, Helen’s Pastry, with the hopes that others will use it for a good cause too.

Thanks again Diane! You made our day!